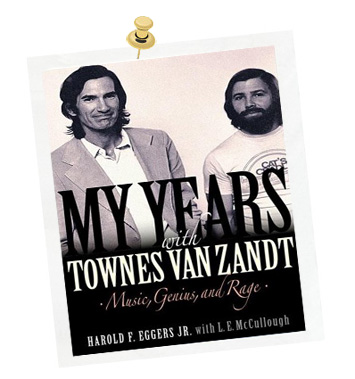 I first came across Townes Van Zandt courtesy of The Cowboy Junkies’ love song ‘Townes Blues’ and their cover of ‘To Live is To Fly’ on the BLACK EYED MAN album way back in 1992. A little bit of research brought me to a 23 track ‘Best Of’ which I purchased for £3.99 (it still has a sticker on it!) from Goldrush Records in Perth, Scotland; but, I really struggled with it; primarily because of Townes’ voice; which was and still is ‘something only a Mother could love’.
Thankfully in the intervening years my tastes have changed and Mr Van Zandt is now a cornerstone of my collection; and quite often the benchmark I now use for intelligent and heartfelt Americana; of which he was one of the finest singer-songwriters ever in that very competitive market place. #Fact
So; when this book was offered for review I couldn’t say “Yes please!” fast enough.
First of all this isn’t your normal biography; although bits and pieces of Townes early life is included but only as background, with tales of his Great Grandfather venturing into Indian territory with the family fortune and coming back with a mixed-race child and who knew he was enrolled in a Military Academy after being deemed unruly at school; then being given electric shock therapy to ‘cure his behaviour’ aged 19? Knowing what we know now about such things and with the benefit of hindsight he must have suffered from Bi-Polar Disorder; but for all of his 52 years he was just ‘troubled’.
The book is told from the point of view of Harold F Eggers who himself had ‘problems’ after serving in Vietnam and going on to become the songwriter’s Tour Manager, best friend, confidante, business partner and occasional getaway driver for over twenty years; while also building a successful career himself in the Music Industry.
Impressively Eggers never comes across as judgemental, intrusive or even sensationalist when recounting stories that will make your hair stand on end; but never actually surprising you.
As TVZ insisted many times in conversations with H, he tells the stories ‘honestly, warts and all’ and boy are there ‘warts’ here!
There are many individual concerts included from across the years, leaving me incredibly jealous at not discovering him until it was too late for me to see him play, as a couple of friends have on his infrequent visits to Europe and the UK where he found an adoring fan base which gave him a new lease of life late on in his career.
I won’t spoil it for you as there are surprises around every corner as our favourite Texas Troubadour’s charm shines through every chapter, even when you would cheerfully hold him down as Eggers strangles him after yet another successful attempt to grasp failure from the jaws of success, in a 20 year roller coaster ride of a tale that will break your heart and make you smile like all the best blockbusters do; and that’s how this story feels…..it’s a Blockbuster (and a ballbuster too).
I’ve seen Heartworn Highways several times so knew of his relationship with Guy, Rodney and the young Steve Earle, but who knew Dylan was a fan and an album by both men was planned but never materialised because our hero, who had cheated life so many, many times finally succumbed to the Ghosts that had haunted him all of his life on January 1st 1997.
Although I knew how the story ended and everything builds towards Van Zandt’s death; the last two chapters were still really hard for me to read; and when Eggers leaves a visibly ill Townes on New Years Eve and flies home to celebrate the holiday with his family; he writes……
“I fell asleep and was drowsing on the living room sofa, when our black lab, Jezebel began barking furiously, scampering around the house as if chasing an unseen visitor.
I woke with a start and watched the lights flicker, then dim for several seconds before coming back up. I tried to quiet her as two more light dimming cycles occurred; then the lights stabilized and the dog hushed.”
Half an hour later the phone rang and Townes wife Jeanene whispered, “Townes has gone.”
By this stage tears were streaming down my cheeks.
The congregation at the service after TVZ’s cremation is a veritable who’s who of the nascent Roots/Americana scene with Guy Clark, Emmylou Harris and Steve Earle among many others sang his songs and told beautiful stories about a very troubled man who history now knows was a true Genius.