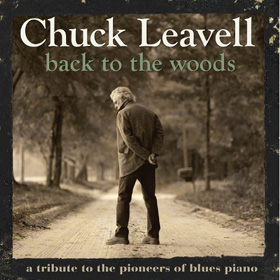 Chuck Leavell
Back to The Woods

Piano player to the Stars twinkles on the ivories

Chuck Leavell is one of those names that make some music fans eyes light up.He was a core member of the Allman Brothers when they were at their peak, later toured with the Stones on and off for three decades, and he has played keyboards on enough albums to fill a decent-sized shop.

He released his first solo album in 1998 and hasn’t been the most prolific of artists since, only releasing another two studio albums and a live one in 2007. This made BACK TO THE WOODS something of a surprise when it arrived on my doorstep.

There’s nothing new or ground-breaking here. I doubt anyone would expect that as Leavell re-visits the music that he grew up listening to, and puts his own stamp on them.

I like my Blues, but very few of the tracks or even the original artists were familiar to me, so everything comes across as fresh and new to ears like mine.

Chuck Leavell’s piano skills are extraordinary in a laid-back kind of way. I’ve been very pleasantly surprised by his rich, smoky voice which suits the late night ‘feel’ just perfectly.

A couple of songs (and their arrangements) stand out like poppies in a wheat field though. Leroy Carr’s Low Down Dirty Dog sounds like it could have been a direction the Allman Brothers could have taken if they’d mislaid a guitar or two. Mean Mistreater, which I only know from Johnny Winter’s Rock version, now sounds like Leavell is jamming with a cool saxophonist in a smoky speakeasy while his lover (in this case Candi Staton) slowly puts her coat on and heads for the door. Occasionally she looks over her shoulder, but he doesn’t ask her to stay. (I should direct videos!).

Otis Spann’s Boots and Shoes gets a very funky makeover with John Mayer and Keith Richards trading licks as Chuck sings like Chet Baker and plays his piano like Ray Charles. That is worth the entrance money alone. Candi Staton takes lead vocal on the gospel-inspired “The Blues is All Wrong”, with Leavell taking his own inspiration from Professor Longhair. That is a feat well worth hearing.

BACK TO THE WOODS has been a rare treat to listen to in these plastic music times.