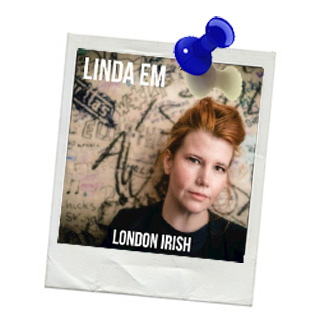 A Short Showcase For a Huge Talent.

Yet again I appear to be ‘late to the party’ with the music of Ms Linda Em; as the quotes on her Press Release appear to show she is; and has been a shining star on the London ‘scene’ for quite a while now.
Although born in Waterford and then moving to a quaint fishing village on the River Thames in London Town’s East End as a child; neither fact really plays a significant part in any of the truly International and pretty epic songs featured on this EP.
The single Wild Fire opens with the striking of a match; which is incredibly apt as this dark duet with producer Gavin Glass simply smoulders with unrequited passion in a way I’ve not heard since Nick Cave and Kylie recorded When The Wild Roses Grow; and similarly reduced me to a quivering mess the first twice I played it.
Then, Linda throws a twisting curve ball with Two Hands which incredibly takes us into the dark world of Edith Piaf…..seriously; her voice wavers and swoops as a piano tinkles out the tune before an operatic choir join the chorus on a song full of Parisian Gothic qualities.
Whoosh! We then get a full on Alt. Country belter with Little Lightmaker; with a pounding drum and sizzling guitar back up to Linda’s Nashville-Celtic warble and pleading; which works fabulously well.
Then the short set closes with White Horse which still errs on the sharp edge of Alt. Country but with a big Technicolour feel to it too; and with only four amazing and very different songs to choose from; I think I’m going to select this as my Favourite Track, for no particular reason other than I like it best.
Listening to these four songs in one sitting won’t always be easy as they are all so very different from each other; but placed together they showcase a singer; and indeed songwriter who isn’t following a straight and narrow path; but one who has a voice and a way with words that she trusts and believes in; as will you when you buy this EP.
Only time will tell which route Linda Em goes off in; but in this crazy world I can’t think why someone with talent in such abundance can’t record an album that stretches these threads in even more directions and still be successful.