Promoting her latest album RUN, local lass Lesley Roley opened the show with a breezily effortless performance that combined the best in Modern Folk and the Rootsy end of Country.

With songs as well constructed as the title track ‘Run’ the wonderful Once plus Lesley’s reinterpretation of Joni Mitchell’s ‘Little Green’ it will surely be sooner rather than later before she is headlining venues of this size herself. 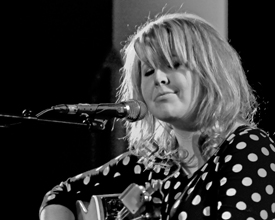 Looking achingly hip with his Redwing boots, long beard and a hat at a jaunty angle Kelley got straight down to business with a very intense and passionate song, possibly called ‘This Ain’t the Last Time’; which set the tone for an evening of sharp songwriting and honey toned singing.

While Kelley’s songs are invariably deeply personal (‘Goodbye Jesse’), sanguine (‘Feeling Alright’) and quite intense (‘Head On’) his introductions are all friendly, self-depreciating and often very funny; which was what I remember most from that night at SummerTyne in July.

The mark of a good songwriter; is their ability to sing a song that you’ve never heard before and make it sound like it’s always been part of your life; which is what happened several times tonight; most memorably ‘It Don’t Come Easy’; which could easily have been a lost track from Neil Young’s After The Goldrush and a bittersweet love song that he wrote on his previous visit to Gateshead called ‘Going Alright’; which also showcased his enjoyable finger picking guitar style.

For all Kelley has been writing songs for a long while now; his solo career is only quite recent; which is a story he tells exceedingly well; and his second album is due out in March; so he treat us to a couple of tracks, and the title track ‘Lighter Shades of Blue’ was everything you wanted to hear on an intimate night like this.

I don’t think he’d run out of his own songs, but he ended the evening with two glorious and slightly brave choices of cover songs – Jackson Browne’s ‘These Days’ and Van Morrison’s ‘Into the Mystic’ which sandwiched Kelley’s very best song to date; the Graham Nash influenced ‘Woman’; which was a real ‘hairs on the back of the neck’ performance.

It was a really good evening of music from two performers who are both ready to jump to the next level; whatever and wherever that is.