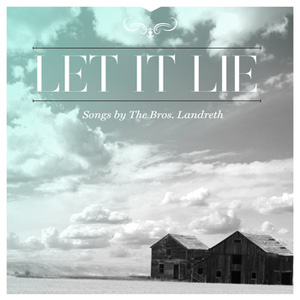 The spirit of harmonious and melodious Country Rock burns brightly in Canada.

One Thursday evening in July I was drying the dishes and listening to Bob Harris Country on BBC Radio 2 when I very nearly dropped a plate. He played a track by a band he’d only just discovered; and to say it took my breath away would be an understatement. I even had the audacity to ask Mrs. H to sssh so I could hear the song through to the end (brave? Foolish?). The band was Bros. Landreth from Winnipeg, Manitoba and the song was called Runaway Train.

As soon as it finished I found their management on the internet and made contact. A month later the disc arrived….but it was intended for a January release! How could I keep a secret this good, for so long? Well I did until now.

Sadly my meagre vocabulary hardly does justice to the music contained on this disc; which starts where Creedence Clearwater Revival then later the Allman Brothers left us dangling nearly thirty years ago. While many guitar bands have come and gone in the interim; there is something magical about the way this band play, harmonise and sing; there’s no other word for it – magical.

In the first thirty seconds of opening track Our Love a bottleneck rubs against the strings, before the fuzzy electric guitar seamlessly slides ahead of a skin tight rhythm section forcing the singer into upping his game. Whoa! We ain’t in Kansas anymore Toto! These boys are pretty damn special.

Every song here is atmospheric and conjures up little vignettes and videos in your head as break up songs like Firecracker, Our Love and Nothing glide past love songs like Tappin’ on the Glass and the title track Let it Lie with grace and class that belies the band’s tender ages.

The Bros. Landreth are real brothers called Landreth, Joey and David alongside Ryan Voth on drums and Alex Campbell on piano and harmonica; plus the brother’s father Wally makes an appearance on Runaway Train.

In the last 20 years or so bands like the Deadstring Brothers, The Band of Heathens and more recently American Aquarium have made a tilt at this vacant  crown but Bros. Landreth knock all other pretenders into a cocked hat – honestly.

The pretentious among us will certainly find elements of the Allmans, CCR, possibly Ry Cooder and maybe Little Feet in here; perhaps even the Band; but Bros. Landreth take all of those influences and move them on into the Americana stratosphere to create a sound that itself will be imitated before the end of 2015.