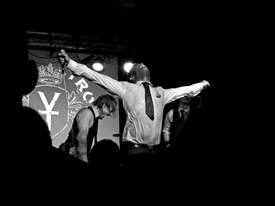 Across the Summer Vintage Trouble were on the bill of every UK Festival worth going to and tonight’s show sold out within 24hrs of being announced; which is unheard of at the Newcastle Cluny.

Part Rock band and part an R&B – Soul Review; Vintage Trouble took to the stage with the swagger of a band that will be headlining much bigger venues in the very near future. In singer Ty Taylor the band have a livewire that looks like early Marvin Gaye and sings like Otis Redding while the band play and perform like the Faces or perhaps the Georgia Satellites .

With only one album to date; the recently released ‘Bomb Shelter Sessions;’ I only expected a short set or one full of cover versions; but no, Vintage Trouble played every song off the album non-stop for exactly two hours in a stiflingly hot and sweaty club. It didn’t even sound like padding as each song included a short sharp guitar solo and a call and answer section between Ty and the euphoric audience who lapped up his every utterance like love struck teenagers.

Highlights? I don’t know where to start? The exquisite ‘Nancy Lee;’ which was dedicated to Taylors mother; or the rather sexy ‘Total Strangers’ about keeping the spark in a relationship or probably the song that ‘stole the show’ on the Jools Holland BBC TV programme, ‘Blues Hand Me Down’ which had the sardine like crowd desperately trying to shimmy and shake along with the Dervish like singer.

It took the diminutive Taylor over 90 minutes to finally take his sweat soaked silver suit jacket off only to reveal a shirt that was completely stuck to his torso, as he introduced a brand new song called ‘Lover Leave Me Be’ with it’s Bo Diddley thumping beat and facial machinations from Ty.

You would have to be very hard hearted not to get a great deal of pleasure from a show as exciting and full of great music as this one and memories of old videos of the Stax shows in the early Sixties stuck in my mind all night; it really was that good.