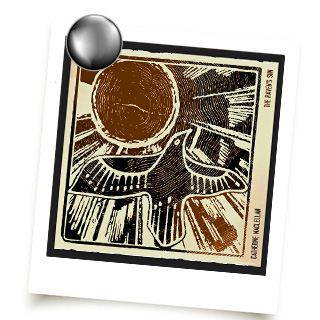 Can someone tell me what’s in the water in Canada that produces so many good singer-songwriters?

I first encountered Catherine MacLellan a few years ago when a friend was the support act in a local club. The way the Canadian troubadour — alongside her musical partner, guitarist Chris Gauthier — held the audience entranced for an hour and a half will stay with me for a very long time. Sadly, I was financially challenged in those days and didn’t buy a CD. But, The Ravens Sun has more than made up for that failure.

Every song here has the gift of sounding like you’ve known and loved it all of your life. The title track, which opens the album, immediately makes me sit back in my chair and let the beautiful words just float over me. I had a similar reaction with the charming “Rushing, Winding Wind”, as MacLellan and Gauthier harmonise like two peas from a pod, and Gauthier’s guitar work will send shivers down a grown man’s spine.

Quite often with music, context can affect how much a song means to the listener. So it was with “Gone Too Soon” when it filtered out of my speakers on the first anniversary of a best friend’s passing. Yes, tears rolled down my cheek from start to finish. Thankfully not every song had that effect on me. “Jack’s Song”, with Gauthier’s dirty electric guitar solos and Andy Leftwich’s fiddle playing, take this folk song into a whole new stratosphere. On “Frost in the Hollows”, Catherine and Chris somehow manage to recreate a Dixie Chicks sound but include some almost classical/Flamenco guitar flourishes.

If you like singer-songwriters like Gillian Welch, Nanci Griffith, and Laura Cantrell, I think you will love The Ravens Sun.