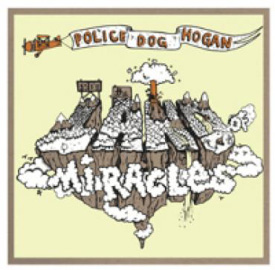 From the Land of Miracles

Well, you can blow me down with a feather! If you are a regular reader of my reviews you will know that I have an open mind about music but also can be very opinionated; which leads me to Police Dog Hogan.

For some inexplicable reason I had them tagged as some kind of Indie-Folk band; probably because I’d seen their name on various Festival posters and adverts in young people’s magazines and had made little attempt to listen to this album.

For that I can only apologise as they are bloody good and right up my street and they are wonderful!
Singer James Studholme has a road-worn voice that has the warmth of a peat flavoured whisky and the band flit between Americana and English Folk with the greatest of ease.

All of the songs on MIRACLES are easy on the ear as they are filled with melodies and tunes; which is a rarity these days.

No one in their right mind would imagine that the band that plays on the opening track Better Go Now come from anywhere other than the Heartlands of America but this band doesn’t but what they do better than most is understand the music and have breathed new life into it.

Black Crow is the same; it couldn’t be anything other than Americana but some of the intricate guitar playing is straight out of the Traditional English Folk book and would make Richard Thompson proud.

Let it burn has an electric guitar threading through the banjo, fiddle and drums and it just begs to be played loud.

I’ve genuinely had my breath taken away by this album as it sounds different and different in a very good way. Trust me; MIRACLES is well worth seeking out before the youngsters claim Police Dog Hogan for themselves.