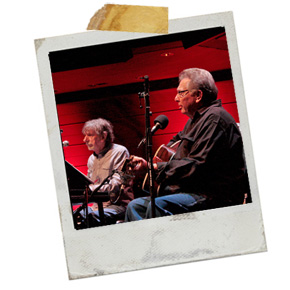 Without physically getting any bigger, SummerTyne Americana Festival by and staged at Sage Gateshead, in the North East of England certainly goes from strength each year. This year the highlight for many attendees was the opportunity to see song-writing legends Dan Penn and Spooner Oldham performing their songs in an intimate setting.
Coming at the end of a very short UK Tour and last seen in these parts back in 2006 the concert sold out within hours of tickets going on sale several months ago; leaving many disappointed fans milling around the box office during the day looking for ‘returns’.
Following a lovely and impassioned introduction from SummerTyne Supremo Tamsin Austin; a huge cheer greeted the ‘mature’ duo as they ambled out of the shadows and took their seats in the centre of the stage.
With no pre-amble the men nodded to each other and ‘melted’ into a beautiful version of I’m Your Puppet. A pop song of the highest order back in my childhood; but tonight Penn’s warm leathery voice and their gentle guitar and piano playing brought out something incredibly special from the now brooding lyrics.
The applause that followed would have done justice to a One Direction concert; never mind for two septuagenarians.
I didn’t recognise song #2 Sweet Inspiration; but it sounded lovely (and nothing like the #5 US hit for the Soul group of the same name I heard on You Tube the following day).
Without any eye contact Dan virtually mumbled, “the next song was a hit for the Box Tops; has anyone heard of Alex Chilton?” Then before anyone had a chance to respond they were taking Cry Like a Baby into a whole new stratosphere with Oldham’s piano playing sounding spookily extraordinary.
How many acts do you know that can slide in a song like Do Right Woman/Do Right Man into a concert as a fourth song and still be able to go onwards and upwards with quality and penmanship? Not many, that’s for sure.
I won’t list every song they sang they performed; but I can’t think of any ‘its’ that were missed out. Every song was an absolute joy and my eyes misted over during Dark End of the Street and I very nearly lost it when that was followed by a brittle interpretation of You Left The Water Running; and I doubt I was the only one sniffling.
Another highlight for; but not for a couple of friends whom I spoke to afterwards was Spooner Oldham’s gruff take on Lonely Women Make Good Lovers. For me I loved the way his voice made it even seedier than usual; but perhaps that was just me.
For a variety of reasons time ‘was of the essence’ so Dan Penn’s stories were slightly curtailed; but still managed to very funny and never short of interesting; which is a lesson a couple of other singers this weekend could have heeded!
While this concert was always destined to get into my Top 10 of all time; when the SummerTyne Southern Soul Choir silently filtered on to the stage at the end; the hair on the back of my neck began to tingle. The tingling didn’t go away until their Gospel take on the Irma Thomas hit, Zero Willpower was long gone into the evening air.
You will see in my other reviews that SummerTyne #10 was a success from start to finish; with several fabulous concerts from artistes old and young; but there won’t be many that will still be talked about in ten years time, like this one will be.
Photo-set http://www.harrisonaphotos.co.uk/Music/SummerTyne-2015/i-NBNzcMq