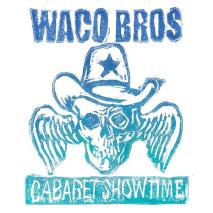 The Boys are Back in Town!

On 6th February 2000, my life changed forever after reading an advert that said, “Imagine the Clash fronted by Johnny Cash!” Later that night I discovered that Country Music really could have a Punk Rock snarl; and it came in the form of the Waco Brothers.
Jump forward to December 2015 and these stalwarts of Alt. Country have released an album of songs that formed their varied musical tastes and boy; they can still Rock the Hell out of a song!
Opening with a 100mph version of Tiger By The Tail; the Waco’s take a classic Country song and add their very own dash of Tequila, Chilli and sizzling steak to make it their very own.
This is immediately followed by as raucous a version of Ooh Las Vegas as you are ever going to hear; confirming that original Cash/Clash statement – Honky-Tonk, Twang and snarl; makes the perfect song around these parts.
Country songs come thick and fast with new songs to me like George Jones’ Girl at the End of The Bar rubbing shoulders with Folsom Prison Blues and a rather sweet Johnson to Jones; but it’s the British songs that will startle and titivate you.
Two T Rex songs make an appearance; well to be exact Debora was actually by Bolan’s original incarnation Tyrannosaurus Rex and I can still remember the excitement I felt hearing this on a crackly radio in my own teens; and the Waco’s treatment is relatively sensitive; but with a bit more Oomph; the other is less of a surprise – 20th Century Boy is exactly what I would expect from the Waco’s if they wore loon pants and sported eyeliner.
If you want surprises and boy; what a surprise it is…..The Waco Brothers cover Pink Floyd! Seriously! I hadn’t actually checked the track list when I played this the first time; and my head twisted with Exorcist like proportions when this came on. Fabulous and bonkers in equal measures; and well worth a listen.
Baring in mind this is a December release; the Waco’s ‘do Christmas’ with their only original song here; the slightly psychedelic Merry Christmas to Me which owes a debt of honour to Capt. Beefheart and will scare the bejasus out of your Granny on the 25th!
Well; the Waco’s have had a ball here and now I can’t wait for their next release in early 2016.