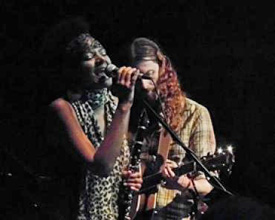 The Birds of Chicago

I love music of many persuasions and especially enjoy live concerts, probably because of the propensity for things to go wrong, but also because when musicians perform to the best of their ability combined with sound and atmosphere these nights can be pretty special indeed; and that’s what just we encountered tonight.

I hadn’t seen opening act Peter Mulvey for a few years and his deep baritone voice and matching guitar style were just as good as I’d remembered. Even though his songs were all knew to me and; presumably most of the audience, they all felt like I’d known them all of my life.

His stories that introduced his songs were all short, sharp and usually funny particularly when he told us about opening for a young girl one night in Indiana who launched herself at him after his set because he was the ‘Shirt Guy’. It took him a couple of minutes to decipher that his song Shirt was her favourite song since she’d bought it years earlier on a sampler CD from Benetton. As he said; “you have to do some weird things to get your music heard.”

The other stand out was an instrumental tune called Black Rabbit that he wrote when living in Ireland and it can only be described as Celtic-Flamenco.

After a short break Mulvey reappeared as the rhythm guitarist in the Birds of Chicago alongside Allison Russell from Po’ Girl, JT Lindsey from JT & The Clouds and a drummer from somewhere in the South of England.

Opening their set with an incredibly raw version of the Clouds Nobody Wants to be Alone that took everyone by surprise, the Birds of Chicago followed it with the first of their new songs; Flying Dreams with JT on vocals and Allison on lead ukulele which set the mood for a charmingly friendly concert.

The audience in the smaller of the two Cluny rooms was a lot fuller than I’d expected; as there were four other concerts taking place around the city and our football team; Newcastle United were playing a Europa League Quarter Final match that was being broadcast on TV.

It’s difficult to explain why the Birds of Chicago ‘work’ as JT and Alli have such differing voices but work it does; and in quite a spectacularly understated way. Allison took lead on most songs with JT supplying harmonies that most singers can only dream of.

Although their debut album had only been released the day previously and judging by the queue at the Merch table very few already owned it; the reaction to the new songs was amazing; and the beautiful Before She Goes, which features Alli whistling (in tune) nearly received a standing ovation (six people did stand; but the others were more restrained).

Although there were only four musicians using acoustic instruments, on the small stage the sound that they created duringSugar Dumplin’ would have made Phil Spector proud.

Two more JT and the Clouds songs were squeezed in with JT making Grey Ghost sound eerier than on the original album and later, ‘Till it’s Gone which is a staple of Po’ Girl concerts received a huge roar of approval at the end.

As the concert drew to a close they even slid in a new song called Kindersville (Child’s Game) that was being ‘road tested’ and sounded deeper and more introspective than what had gone previously; but you do have to have light and shade in your life.

As Jeremy Lindsay introduced Trampoline he had to admonish Alli for being ‘too frivolous’ which was stopping them being a real Roots band. This set me thinking; too many bands I see playing this same style of music are guilty of taking themselves too seriously (as are many Roots fans) so to see Allison Russell skipping about the stage with a constant smile on her face was like a breath of fresh air.

With barely time to cast a shadow in the changing room the band returned for the obligatory encores and Fever Dream, which I loved on the album actually sparkled tonight and brought a wonderful evening to a climatic ending.

I can’t recommend their album highly enough, but if you get the opportunity to see Birds of Chicago play live; make the effort to see them. You won’t regret it.