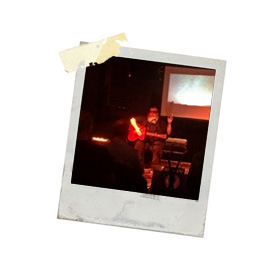 The day before this show I was invited to cover a different gig at the prestigious Sage Concert Hall (money was involved). So, I invited my friend Steven K Driver from the prestigious purveyors of Northern Gothic pop music, The Agency, to cover this gig on my behalf. Here are his thoughts:

Ghost Republic, the latest long player for alt country collective the Willard Grant Conspiracy, is one of those albums that may at first prove a challenge to some listeners. However, repeat listens help to peel back the layers from, or at least reveal some of the depth of, what is a conceptually sound and beautifully moving piece. As Robert Fischer told us early into their performance, the album is to complement a short film and a book inspired by Bodie, a ghost town in California. So this was not an audience or performance looking for pop hits or redemptive melodies.

We were gathered in the Cluny 2 a small and acoustically wonderful venue (they also happen to have a top sound engineer in Ross Lewis) just outside of Newcastle City Centre. It is a room that used to be a theatre and is ideal for the kind of intimate performances we were about to get.

Before Willard Grant Conspiracy, a local singer-songwriter,Craig Clarke stepped up to the stage and his lilting tone and higher register proved a fine foil for what would follow. Songs like Dive In and Cheap Wine held the audience in silent appreciation. This was a set that demanded attention but Clarke managed to lighten the mood when explaining that the songs We Were Warned and Underpaid Stars were based on 80s movies, Threads and Tootsie respectively.

The Willard Grant Conspiracy is a collective that centres around main singer/songwriter Robert Fisher and his rich baritone. As with the new album the performance consisted only of Fisher himself and David Michael Curry on viola. It proved to be enough as the duo took us on a heart rending journey through a forgotten America. First Fisher explained that the film in the background would complement the new album, with its desert images and profound messages (e.g. “people burn the brightest and bear the strongest ghosts”) from the forthcoming book and he was proven right.

The tone was set from the first song when the duo play a stripped down version of Evening Mass from 1998’s Flying Low. It was clear that favourites would be re-interpreted and that the vein running through all the music would be the same as the sound binding Ghost Republic. Curry’s viola would offer the softness to counter the often darker overtones from Fisher, as he laid his America bare before us. This was followed by tracks from 2004’s Regard the End, an album with a sound that fits more immediately with the latest collection. The haunting rendition of The Girl in the Well was a high point in the very strong set.

We were onto the fifth track before Fisher paused to tell us the story of Bodie and explained the concept behind Ghost Republic before following up with tracks from the new album. Album highlight Rattle and Hiss was every bit as menacing live as on the stereo, while the duo breathed new life into Take No Place; and also Piece of Pie (a moment of light relief on the album) when Curry takes over vocal duties; and so it was on the night with a vigorous applause for his performance.

Fisher and Curry did not get far from the stage before being compelled to encore. They begin their six song encore with Ghost Republic, seguing into the instrumental Parson’s Gate and onto The Onlu Child with Fisher sneering sinisterly around the opening lines “Mary, Mary not so contrary”. Another highlight of the night was offered up in the form of The Ballad of John Parker, which Fisher delivered acapella to a thunderous reception.

The night ended with Oh, We Wait, the closing track from the new album, which proved a suitably downbeat finale to a night of music that eschewed pop stylings in favour of wit and substance. There were few smiles as people left the venue but the crowd seemed to disperse satisfied with their evening’s introspection.