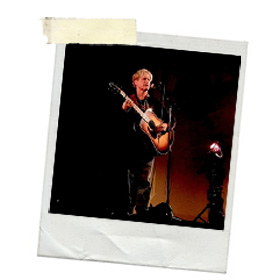 I like Sam Baker but wouldn’t describe myself as a fan; even though this was the third time I’d seen him play live. The first time; which doesn’t seem five minutes ago the singer had long curly golden locks and was wearing a buckskin jacket with long fringes making him look every inch the Rock Star. Tonight he looked for all the world like a genial History teacher.
There was no support act and Baker played two sets; which was just as well because he still struggled to please everyone in the crowded auditorium who spent the last twenty minutes calling out requests that would have stretched the concert by another two hours.
Normally a Sam Baker concert has Chip Dolan on guitar, accordion, keyboards and harmonies but tonight; after discovering the piano during the soundcheck, the first set began with a haunting version of Not Another Mary which featured the long term cohort on the Old Town Hall’s Grand Piano. Baker shifted the set list round during the afternoon and hastily re-arranged a couple of songs until 90% of the show allowing Chip the opportunity to play the beautiful instrument with only a few essential guitar parts shoehorned in.
One of the delights of any Sam Baker concert is the stories that intersperse the evening and on occasion they’ve even been known to last longer than the actual the song that they were meant to introduce. With a mischievous smile; Sam explained that tonight the stories would have to be abridged versions as they wanted to play as many songs as possible and “You’ve heard all of the stories before, anyway.”
That wasn’t the case as Baker kept his earlier promise of a selection of songs “old and new; some with kinks and some kink free” and the kink free new ones were really, really good; as were the stories that led into them.
Of the older songs Things Change, Palestine and Odessa were all delivered in Bakers’ dry laconic style and in some cases were virtually Waitsian; but with a voice like rough velvet that only emphasises the tenderness in his worldly observations.
One new song in particular; about a dysfunctional couple; called Isn’t Love Great? Is as good as anything the aforementioned Tom Waits has written or; as a friend pointed out – England’s finest songsmith; Sir Ian Dury.
Another highlight was the story about the day Sam was on a train in Peru and a terrorist bomb exploded killing three people, including a child in the carriage he was traveling in. The opening lines of Steel; ‘I’m sitting on a train to Machu Pichu/ the passenger car explodes’ are as thought provoking as the average music fan will ever hear and tonight’s version which featured Dolan’s sympathetic piano playing was both enchanting and tear inducing.
Which has brought me around to Chip Dolan and ‘that’ piano; I’ve been going to concerts for nigh on 40 years now and I’ve seen my fair share of great/legendary musicians but I’ve never seen anyone look like they were enjoying playing an instrument half as much as Dolan did tonight. Possibly because ‘finding’ the piano was such a surprise to him; but the look of sheer delight on his face as he tinkled the ivories was worth the entrance money alone and Baker had the good grace to let his partner have more than his fair share in the spotlight making this concert spectacularly special.
http://www.sambakermusic.com/index.html