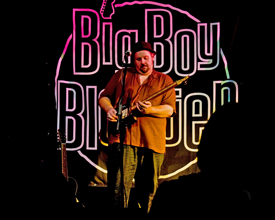 Following an embarrassing squabble when I tried to get into Hall 1 where an AC/DC tribute act was about to play to a packed crowd of 300+ I had to scurry around the building to the smaller Hall 2 to find only a handful of people spread around the shadows as local Award winning Blues DJ, and ‘living legend’ Gary Grainger was displaying his dexterous skills on an acoustic guitar before announcing his final song.

As he packed his guitar away I watched Big Boy Bloater standing in the doorway surveying the disappointingly barren landscape. Eventually realizing that it wasn’t going to get much better; he downed his pint; took a deep breath and made his way to the stage; strapped his guitar in position and urged; nay demanded that the audience move to the front of the stage which actually created a nice intimate atmosphere.

With a big smile and an obviously heavy heart Bloater got the party started with a rip-roaring version of the LOOPY album opener; Bear Cat, which received a warm response as it ended; then tore through songs by John Lee Hooker, Screaming Jay Hawkins and even Lightning Hopkins as well as a few of his own memorable tunes, each performed if he was playing in front of thousands.

To some degree it’s always going to be a brave decision for someone like Bloater, who normally fronts a tip-top band, to stand alone on stage armed only with an acoustic guitar, a Stratocaster, a three string cigar-box guitar, a loop machine and a voice made in the bowels of Hell; as he has nowhere to hide; but he seemed to revel in tonight’s ‘challenges.’

As usual Bloater’s playing on the Telecaster was as inventive as ever; but the combination of acoustic playing and the gizmo box was remarkable, especially on his version of Shake That Thing which received loud applause and plenty of smiles and ‘nodding’ from the small; but particularly influential audience.

For me the most memorable part of the gig however, was whenever the cigar-box guitar was introduced; because coupled with the singer’s deep and raw bellow, it created a sound so earthy and dirty I was transported back to some kind of pre-WW11 Louisiana Juke Joint.

As a lover of the latest album; LOOPY, I was pleased to hear a couple of these self-written songs included, alongside the bunch of fail-safe Blues classics; especially You Don’t Know Diddley, the re-worked Double Whammy and a love song he dedicated to his wife Lisa, More Than a .

While tonight’s audience was disappointingly low (the previous evening in Edinburgh and the following in Norwich were both sold-out!); everyone’s jaws dropped when he created the backing track for Only Fools Know Everything,  with the Telecaster before swiftly switching to the cigar-box for a spellbinding song that will surely become a showstopper when played with the band next Spring.

I’ve seen Bloater and his band a few times now and they are always great value; but tonight the solo show was genuinely jaw dropping; as he created a sound as big as his waistline; that recreated the dirty Blues we all grew up listening to, but bringing it kicking and screaming into Buzz Lightyear’s 21st Century.