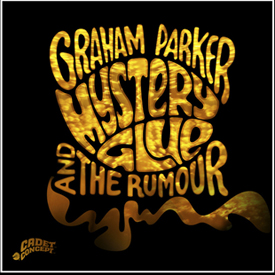 The Parkerilla is back on the up escalator.

After nigh on 20 years exile in America, playing and recording in a variety of guises Graham Parker has now returned to his R&B Roots and back into the arms of those who truly love and understand him…..The Rumour.
With hardly any forewarning GP got back together with old cohorts the Rumour in 2012, recorded and released the critically acclaimed and best-selling Three Chords Good alongside a TV documentary and here they are again; doing what they do best and in an even cooler way.
Not knowing what to expect I was incredibly nervous as the disc slid into the player; but opening track Transit of Venus was Parker of old with a quirky thread from his more recent solo outings; and by golly it works.
No longer an ‘Angry Young Man;’ Parker has mellowed with age; as the next track Going There amply proves with a quirky sing along chorus, poptastic melody and inclusion of  a Routemaster bus bell!
Old fans shouldn’t worry either as GP can still be sarcastic, cynical and caustic (Slow News Day and My Life in Movieland) cuttingly observant (Flying into London and Fast Crowd) and he has a way with words that will put his copyists to shame (e-mail me for a long list!).
While I own 6 of Parker’s solo albums and the one with the Figgs, they very rarely get a public outing; yet I still go back to the ones he recorded with the Rumour that sound tracked my transition from a boy to a man.
Praise must got to everyone involved as GP’s voice has possibly never sounded finer and the Rumour; God Bless them are as brilliant as ever; which is staggering as the album was recorded in 6 days in the legendary RAK Studios in London Town.
As with Three Chords Good, Mystery Glue most certainly stands shoulder to shoulder with those genre-defining albums, and in the case of the countrified sound of Railroad Spikes and the quintessentially English punk-Folk song Pub Crawl, Graham Parker and the Rumour are definitely still squeezing out sparks in the twilight of their careers.