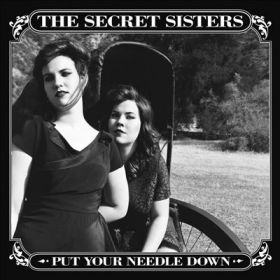 Secret Sisters
Put Your Needle Down

A journey into the past for the Secret Sisters’ second album

This has been the most difficult album to review in a very long time, as I loved the Secret Sisters self-titled debut. It was sparky and refreshing in its own delightful way, but Put Your Needle Down had me on the back foot from the bleak monotone cover and opening track “Rattle My Bones” — both the antithesis of that previous album.

For a long time, I even thought I may have a faulty copy, as the production is so muddy and flat, but apparently not. How could this be, with T Bone Burnett in the production hot seat? Well, now I’ve given it time to grow on me, I’m beginning to love the album. But that’s only possible if you completely forget the previous effort.

The Sisters have gone for a grown-up sound here and they’ve achieved that, with bells on! “The Pocket Knife” is incredibly atmospheric, using their trademark harmonies to great effect over a squealing guitar and nearly dub-bass backing – very White Stripes.

We even get a cool stab at alt-country with “Black and Blue”, which steps neatly into Neko Case territory — using a sweet country song and giving it a healthy dose of Gothic cynicism — which is right up my street, by the way.

“Dirty Lie” is in a similar vein, with the Sisters sounding all sassy and ready for revenge on a track that swings like a hangman’s noose.

One of the few songs that tips its hat to their previous offering is “Good Luck, Good Night, Goodbye”.  But, even that has a nicely dark thread weaving through the lyrics. These girls don’t always play nice.

I’m going to take you back to track two now — “Iuka” — which, like track one, threw me. It’s a raw Southern Gothic murder ballad, and is now one of my favourite songs of the year. It’s about a small town in rural Mississippi and it is classic sex, sweat, murder. It builds to a crescendo of retribution. What’s not to like?

Baring in mind what goes before it, we shouldn’t be surprised that the album ends with a rollicking spiritual tune, written by the Sisters. “River Jordan” is a real foot stomper that will leave you with a smile on your face.