For a variety of very personal reasons tonight’s gig was something of a ‘celebratory’ party for me and I couldn’t think of a finer pair of performers to spend the night with than local Delta Blues aficionados Monkey Junk plus the headline act, Matt Andersen from Canada was someone I’d been desperate to see for a few years.

John Nellist and Andy Turnbull; who make up Monkey Junk have been on the local music scene for a few years now but look and sound like they were born to play this rawest version of the Blues.

Their 40 minute set was a mixture of Classic and rare songs that had a  audience eating out of their hands after three or four songs. 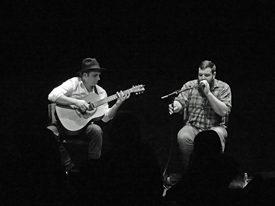 Andy Turnbull has been a Master of the acoustic guitar for as long as I’ve known him; but tonight he had me considering that he might be the finest Blues guitarist at the moment. His touch on the strings is sublime and baring in mind Nellist has finally grown into his gruff baritone voice; making the duo unmissable if you even vaguely like the Blues.

Many established artists would have been intimidated to follow such an act; but the lank haired bear of a man; Matt Andersen duly rose to the occasion with a sizzling display of virtuoso guitar playing that accompanied some really interesting songs.

Opening song, Make You Stay oozed quality and set the standard for the next hour and a half.

Andersen has an interesting singing style; usually pursing his tightly closed lips and letting the sound come out of a gap in the corner like steam from a kettle which I’d not seen; nor heard before.

During I Play The Fool For You; he thrashed the strings on his poor acoustic guitar so hard I was sure one or two may snap; but they didn’t and it meant the song is still in my head today!

A few songs (Drift Away and You Are My Home, spring to mind) were a bit too smooth for my own personal tastes; especially their formulaic guitar solos that wouldn’t have been out of place on a Joe Bonamassa album; but when he put his mind to it Andersen was also capable of performing blistering guitar solos that only enhanced his clever and very personal songs (Home Sweet Home and I Lost My Way?)

One song I especially enjoyed; possibly because it stuck out like a sore thumb was the Gospel/Soul People Get Ready; which was quite outstanding in it’s own way.

Another highlight was the mournful yet beautiful So Gone Now which was as romantic as it was haunting.

As the set drew to a close Andersen told us a humorous story as part of the build up to Devil’s Bride and the song itself and his impressive guitar playing; left the audience whooping with joy and the actual finale; Feel Like Going Home with vocals and sentiment from the pits of his stomach had a few people standing to applaud the end of an intriguing concert.