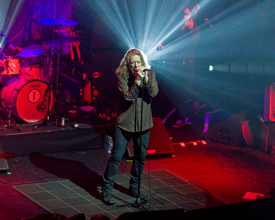 Robert Plant and the Space Shifters

Although I’d really liked the latest Robert Plant album, tonight was initially something of a box ticking exercise, as I’d never seen the one time rock god play live.

There was a mix-up over our seats (we had to stand right at the back of the hall) and confusion over who was going to look after my camera bag, which I was only allowed access to when photographing the band from the upstairs balcony. So, I totally missed the support band. Sorry. But, when the lights went down for the main act, there was a palpable intake of breath from the sold-out crowd. When Plant finally took to the stage, there was a look of almost religious fervor on the faces of many people around me.

The opening song was quite acoustic and very intense with a hypnotic backbeat, so I think it could have been “Rainbow” from the new album, but I’m not 100% sure. It was the same with the next song. But, #3 was definitely “Turn It Up,” and this interpretation had a very heavy organ sound, not unlike what Jon Lord used to add to Deep Purple donkey’s years ago. It brought a smile to my face.

What I’ve always liked about Robert Plant shone out tonight: he knows who he is and what his fans expect of him. Of course, he could have spent the last 30 years rehashing Led Zeppelin songs alongside Jimmy Page for ever-diminishing crowds of time-warped stoners, and taking the proceeds home in a wheelbarrow. But, instead, he has chosen to plough his own idealistic furrow, embracing Americana, rock and roll, bluegrass and world music. Moroccan melodies in particular. And, at some stage, all of these ingredients turned up in one song or another.

The singer has surrounded himself with a very, very good, professional band who all know their parts, especially guitarist #2, who was quite the showman and reminded me of Marty McFly the way he jerked around the stage.

The set was very well-balanced with new songs (“Embrace Another Fall” was outstanding) and some older solo material … and, much to my surprise Zep’s “Going to California,” which fit in the Americana mould exceptionally well. Meanwhile, another song kept sounding like it could break into Dazed and Confused, but didn’t. It’s only through thorough research on my behalf that I know we also got to hear a Zeppelin song I wasn’t familiar with: “Babe I’m Gonna Leave You.” It began with a cool acoustic intro but developed into a big, full sound that didn’t quite shake the rafters, but a few sets of false teeth must have been perilously close to shooting out.

As an outsider tonight, it was interesting to hear these songs. At one stage, I got to thinking that Led Zeppelin definitely had a benign influence on the grunge scene with the quiet/quiet/loud/quiet/loud/louder template that dominated my son’s bedroom in his teenage years. Plant’s first love, the blues, was never far away. And, with no introduction necessary, he and the band even stormed through Cream’s version of “Spoonful,” much to my delight. (But for the confusion of a couple of dickheads who yakked throughout every song — “I love this one because…” — all bloody night.)

As the minutes were ticking away, Plant introduced “Little Maggie” as first being written in the year of his birth (1948), which makes him the same age as my brother who was standing next to me. (My brother looks a good ten years younger than the singer). And, here’s a thought: that makes Robert Plant the same age as Prince Charles. Wow! At any rate, the song was a highlight of the evening and fit into the set like a kid glove.

Next, the band reinterpreted “Fixin’ to Die,” which had a hard rock feel but also lots of loops and whirs from the keyboard in the shadows. Interesting; but not my cup of tea.

To close the show, Plant delivered an amazing medley that started with the unofficial Geordie anthem “House of the Rising Sun” (The Animals came from Newcastle), then a bit of “Whole Lotta Love,” “Mona,” and even more “Whole Lotta Love,” which sent the crowd absolutely bonkers.

After a short gap, the band returned for the obligatory encore and, in a swathe of sweeping lights, fully opened the throttle for probably the best song from Plant’s armoury to end a night like this: “Rock and Roll!” Earlier in the evening most of the people around me had applauded everything loudly and enthusiastically, but had listened quite reverentially. Now they were head banging like it was 1974.

With hindsight, the half-hour of padding was more than eclipsed by the last 15 minutes and absolutely everyone went home happy. 24 hour hours later, I too really enjoyed the concert.