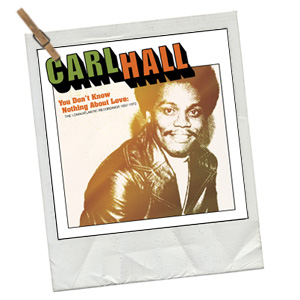 Naturally Gifted Soul Singer steps out of the shadows

I would say I’m a Northern Soul fan; owning over 20 albums all of which happen to be compilations from a variety of record labels (predominantly obscure) and Carl Hall doesn’t feature on any of them.
But he has a helluva voice – FOUR octaves and can interpret a song better than a cunning linguist at the UN building.
Let’s begin by forgetting the ‘Northern’ tag as this is cool, sexy, sassy Blues infused Soul in the footsteps of Otis, Marvin and the legendary James Brown suggesting the label executives at LOMA/Atlantic should hang their heads in shame for keeping these songs locked away in a dusty vault.
The retrospective opens with the title track You Don’t Know Nothing About Love and I’m staggered that this song never troubled the charts on either side of the Atlantic Ocean; as a really tight house band bring out Hall’s magnificent voice like Spring rain does a beautiful flower. The lyrics are a pure joy; but Hall’s voice will have you wilting at the knees.
You will recognise a couple of cover songs; although the Stones classic Time is on My Side becomes a pleading Soul ballad and his treatment of The Long and Winding Road is akin to anything Ben E King did in his prime. But the winner is surely his Rhythm and Blues psychedelic re-interoperation of the Jefferson Airplane hit (Need) Somebody to Love which crosses all kinds of boundaries and would still sound progressive if released today.
Of the rest; He’ll Never Love You is a late night heartbreaker in the making the smouldering It Was You (That I Needed) is beautiful beyond belief as it showcases Hall’s amazing four octave voice in all its glory.
Although not actually the best song on the album; or even my favourite The Dam Busted has been a bit of an ‘Ear Worm’ over the last couple of weeks.
The album closes with four ‘alternate’ takes of earlier songs; and could easily have been left off as they don’t add anything to this superb collection of lost Classic Soul music.