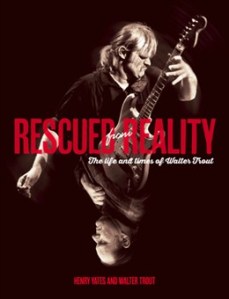 Ask the average Rock fan who Walter Trout is and the vast majority will probably say “Didn’t he used to play with John Mayall?” Or possibly “Didn’t he used be in Canned Heat?” Both answers are correct, but after releasing something like 20 albums under his own name since leaving the latter band the genre-defining guitarist has a story to tell; and boy is it worth reading.

Trout tells his story in an honest ‘matter of fact’ style; not unlike his song-writing. He appears to have had an idyllic childhood in Ocean City with his father instilling in him a love of reading and learning and his mother taking him to see Ray Charles and James Brown in Atlantic City and Richard Burton in Hamlet in New York. It was also his mother who instigated a meeting with Duke Ellington which was to prove a life changing moment for the aspirant teenage trumpet player. Following his parents acrimonious divorce and his mothers subsequent re-marriage to a man with Post Traumatic Stress Disorder Trout turned to drink and drugs as a means of coping around the same time he discovered Rock and Roll in the shape and sound of Paul Butterfield and Bob Dylan.

The book then gets into a groove with stories of an itinerant life as a struggling musician; driving hundreds of miles not knowing if there would be a gig at the end of the journey or if there was, would he get paid? All the while learning his trade and earning accolades but very little else.

One story ends with Walter and a buddy playing a festival in the backside of nowhere and having to sleep in a dog pound while he earned enough money collecting litter to pay for the journey home.

Perhaps my favourite story concerns his friend in a band called Steel Mill; who also played on the New Jersey circuit. Trout advises the guy to give up the guitar and stick to singing and song-writing; the friend was Bruce Springsteen! In many other biographies this would have been a whole chapter; but it’s very nearly thrown away in three paragraphs.

I learned new things about the guitarist on nearly every page; who knew he played in John Lee Hookers band or Big Mama Thornton’s? His relationship with both is described in self-depreciating honesty and the part about Big Mama’s dentures had me laughing out loud.

The happiest part of Trout’s early career was when he was a member of John Mayall’s Bluesbreakers with the artist’s admiration for each other shining through every line; and his time with Canned Heat would have been hilarious if it was a movie; but it wasn’t but should be.

Walter obviously loves his life and has very few; if any regrets but a thread that weaves through the middle of his book is his frustration at being succesful in Europe but can’t get a gig under his own mane in his homeland. This changes towards the end; but there is still a slight bitterness in his words about his treatment in America.

Music fans oftan place their heroes on pedestals and presume they all live in mansions or super cool ‘cribs’ by the beach, but the reality is guys like Walter Trout give everything they have and more on tour, then pawn their guitars to pay the rent when they arrive home.

After a lifetime of horrendous management deals and addictions that would have defeated the majority of people, since the millennium and under the guidance of his wife Marie and his friends at Provogue Records Trout has released a bunch of albums that have not only made him some money but also won plaudits and awards for his song-writing and fearsome guitar playing all around the world; and with a wonderful tribute album to Luther Allison under his belt which followed on from his most succesful record to date; Blues For the Modern Daze and Trout’s 25th Anniversary in the Music business just around the corner, his record company decided now was the time for him to write his biography. But fate played its cruel hand one more time and in June 2013, while on tour in Germany he woke up in terrible pain to find his body bloated and filled with fluid.

He had a disease that had caused a cirrhosis of his liver. A transplant was the only option; but he had neither the cash nor insurance to cover such treatment and a Social Media campaign was launched. Walter had no idea what the outcome would be; so carried on touring and threw himself into chronicling his life with Rock journalist Henry Yates.

While waiting for the fund to materialise and instead of sitting around feeling sorry for himself Trout began writing songs for one more; and possibly his last album, Blues Came Calling. The album was subsequently scheduled for release as Trout’s fan base, including numerous members of the Blues community rallied around in an unprecedented way and the target figure was easily surpassed and the operation scheduled.

The book ends there; but, and this isn’t a spoiler Walter Trout’s liver transplant was a success and he’s currently recuperating and actually planning on touring to promote the album and the book, later this year.

What a guy and what a story.