The 67 year old former Rock God ambled on stage with a smile on his face and mug of tea in his hand and still managed to look ‘cool’. He was immediately greeted with a standing ovation from the sold-out crowd before launching into his adaptation of the Who’s legendary Rock Opera Tommy in all its pomp and magnificence. 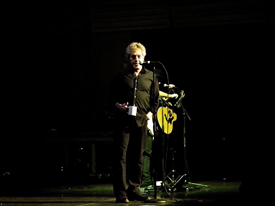 Obviously Roger no longer struts around the stage like a peacock in a fringed buckskin jacket – tonight was more comfortable shirt and slacks, but his relaxed professionalism brought out the best in familiar songs like Amazing Journey,I’m Free and the simply magnificent Pinball Wizard which were all performed and greeted as if they’d been written yesterday. Pete Townsend’s younger brother and lookalike, lead guitarist Simon took the vocals on Acid Queen, and sounded exactly like the elder sibling. Later, Roger injected just the right amount of menace into both Cousin Kevin and Tommy’s Holiday Camp to send a shiver down the back; but couldn’t hide a smile half way through the latter.

Halfway through it became apparent that ‘Tommy’ hasn’t actually aged well and a few of the songs (esp Overture and Underture) sounded especially dated, and had the capacity audience shuffling in their seats.

Final song on the album, We’re Not Gonna Take It began nice and Bluesy before slowly building up into the frenzied rocker that finally got the fans back onto their feet singing along and punching the air.
But the gig wasn’t over. After ordering another mug of tea, Roger announced he was going to sing some songs that he’d either never sung with the Who or not for a very long time.

The second half started fantastically well with Who Are You and a saucy version of Pictures of Lily; then it went downhill with a series of rare album tracks and a couple of cover versions that only die-hard Who fans recognised, thankfully things got back on track with a blistering version of Baba O’Reilly; but it was too little too late for me. 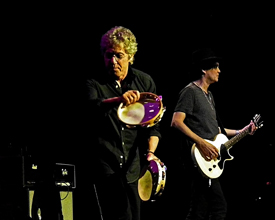 Instead of ending the evening with the Who anthem My Generation which everyone expected; the band waved goodbye and Roger strapped on a ukulele before treating us to a very slow song called Red, Grey and Blue.
Some of the songs I heard tonight were so good, they will live in my memory forever; but, baring in mind the back catalogue available to Roger Daltry and we were charged £40 & £50 to see the ‘Legend’, he seriously miscalculated the choice of songs he did play.

photos from the gig @ www.harrisonaphotos.co.uk