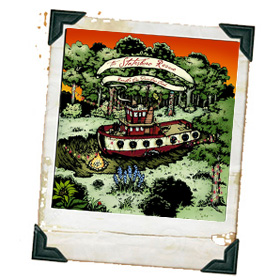 The Statesboro Revue
Ramble on Privilege Creek
Blue Rose BLU DP0607
The Sound of the South on a Saturday Night.

This album has sat on my desk for several weeks alongside four or five others that all come from the same stable; what used to be Southern Rock, or indeed Soft Rock bands that have added a mandolin or banjo to ride the coat tails of the Americana boom.

In this instance The Statesboro Revue are a tad more original than the rest; but I still can’t help thinking they spend their teens listening to their Daddy’s Allman Brothers and Bob Seger albums until the stylus wore out.

Track 2; Huck Finn begins with a neat acoustic guitar before a mandolin, banjo, fiddle and simple drum beat lead singer Stewart into a sweet love song that should be listened to as the sun sets while you sit on a back porch.
L’il Mary’s Last Stand is about as Country as the album gets with a Bluegrass feel to the banjo and fiddle.

The mood perks up on Love Run Easy when the band adds an organ to the sound and suddenly they enter un-chartered waters with one of the highlights of a good album.

“Ramble on Privilege Creek” ends with a bit of a boogie; Hands on the Sun is quite a powerful song and I presume will give everyone the chance to showcase their talents when played live.

On reading the previous few paragraphs it might read like I didn’t like the album; that’s not the case; if I stumbled on Statesboro Revue in a bar in Austin or Nashville I’d be in my element, as Garrett Mann’s guitar playing is exceptional and elder brother Stewart has a voice just made for this kind of Soulful Rock music; so after a few beers I’d think they were the best band in the world and, more than likely buy this on my way out.

But I’m not in a Texan bar; I’m in my office and I am enjoying “Ramble on Privilege Creek” a whole lot; dreaming of listening to this with the windows down in the car on a sunny day.