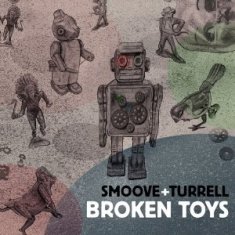 It’s only by the skin of their teeth that Smoove and Turrell will appeal to ND readers; but their third and best album; combines the best of Daptone style Soul with edgy Jazz-Funk overtones and a singer who has a voice steeped in the Bluesiest of  Chicago Blues.

The album opens with a Prince meets Sylvester style guitar and keyboard squabble on Have Love before singer Turrell slides seamlessly into a love song that’s just perfect for a sunny afternoon.

While always a dance record, Broken Toys comes at you from a different angle than their two previous offerings, as the songs themselves take precedence over the rhythm; even if the band do put in the shift of their lives sounding as close to the House bands of Stax and Atlantic as scallys from the North of England are allowed to be.

The subject matter is quite brave at times with Play To Win tackling jealousy, Long Way to Fall is about still wanting to be part of the gang with all it’s temptations of infidelity and drug taking and with One Woman Army it’s a broken man watching his partner successfully move on with her life; all done over a superb soulful soundtrack.

It’s evident throughout the album that each member knows exactly what they are meant to be doing; and where they fit into the final sound; but most importantly they sound like they are absolutely loving what they are doing.

The 7 minute title track Broken Toys may challenge their core fans, as it skirts with new age Jazz; allowing David Wilde to show his skills on the flute over a hypnotic backing track that includes the accordion and Double bass as Turrell tells a very grown up story before repeating the chorus ad-infinitum until the fade.

That song just about sums up the album Broken Toys; as it’s all very mature yet still commercial, covering a lot of ground and will not only appeal to their fan base but cross over to younger and older music fans.