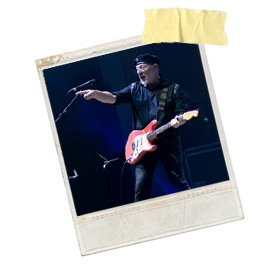 The Sage Hall One,

I have seen Richard Thompson a number of times now (although not as many as some of my acquaintances who are up to 15) and I can honestly say that the guy has always delivered a tight, well balanced and excellent show every time.

Tonight was no exception to that list. As I exited the venue with the power and passion of RT’s second encore (now that is unusual – The Sage doesn’t really “like” second encores they want you out and away early so they can lock up) of Fork In The Road still ringing in my ears I turned to the guy who had seen fifteen plus shows for his opinion. “Excellent” he said. ”Brilliant…but Richard Thompson never does a bad show they are all like that”.

My friend was right. Richard Thompson always delivers a great show. The guitar playing is extraordinary as you would expect…jaw dropping at times and during Guitar Heroes from his new album Still in every style from Django Reinhardt to Hank Marvin!

For his opening song he was joined on stage by support act The Rails (who themselves provided as good an opening you will get). “A bit of nepotism” quipped Richard T as one of the band is none other than his daughter Kami Thompson and the other her husband James Walbourne. They provided a very pleasant foil on That’s Enough from last years Family album. RT and LT’s (that’s Linda Thompson) legacy is in good hands I feel with these two.

The show then continued as the trademark pink (well it looked pink under the lights) Strat was taken up and The Rails were replaced by his band of Michael Jerome, drums, and Dave Faragher on bass. Numbers old and new then kicked off with a rip roaring start to the show an excellent Sally B from 2013’s Electric and Broken Doll, from the new album, had the feet tapping and heads bobbing. He then played “one from the 70’s” as an exquisite cover of Sandy Denny’s Shame Of Doing Wrong.

Highlights were as always the now classic 1952 Vincent Black Lightning, Al Bowly’s In Heaven Now and a rip snorting Wall Of Death. But the new songs easily stand alongside the old as Beatnik Walking and Patty Don’t You Put Me Down showed.

Those encores also included one of the best Tear Stained Letter’s this reviewer has heard.

So, yes a Richard Thompson show may be familiar to his hard core fans and always exceptional….but at the end of the day…what’s wrong with that?