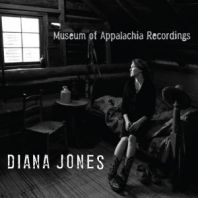 Oh Sister where have you been?

I have to confess that I’ve actually been aware of Diana Jones for a couple of years now; as she’s a regular visitor to the Jumpin’ Hot Club which I’m a attendee; but as I don’t like ‘Mountain Music’ or Bluegrass I’ve never seen her play.

This is the native New Yorker’s 7th album and something of a labour of love. Alongside fellow musicians Matt Combs and Shad Cobb and Sound Engineer Joe DeJarenette they spent a single December weekend at Peter’s Homestead Cabin, Museum of Appalachia, East Tennessee recording these 11 songs, with an array of acoustic instruments and only the barest of recording material.

As you’d expect with an album of Appalachian music there is a Spartan simplicity to every song; but Diana Jones’s voice and DeJarenette’s production has created a beautiful, crystal clear, warm sound that the majority of Nashville studios would be hard pressed to recreate.

O Sinner which opens the album is; as the title suggests, slightly Gospelish in theme but as far from ‘Holier Than Thou’ as you can get and had me hooked like a fish on a line.

Diana wrote all of these songs especially for this project; but the prayer like, Song For a Worker has a timeless quality to it and could easily have been written in the 1930’s; although the sentiment is just as relevant today.

There is a very Celtic feel to the beautiful love song Ohio; which is about a boy and girl in 19th Century America, on opposite sides of the Irish Religious divide; but the boy is forced into an arranged marriage, back in the Auld Country; but never forgets his one true love.

As is my won’t I’m always drawn to songs about the Devil; and Diana fairly fizzes as Satan takes her up the mountain and offers her all manner of riches in exchange for…who knows what? Thankfully Ms. Jones retains her dignity and honour after banishing him and his temptations. This is as good as Appalachian music gets for me.

Diana Jones and indeed Appalachian Music has never sounded finer as she does on this astonishing labour of love.