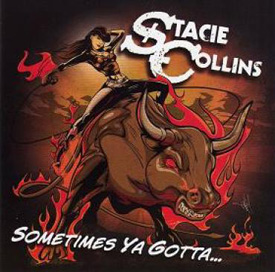 The title SOMETIMES YA GOTTA….only makes sense when you see the CD cover, which is a cartoon version of a very sexy Stacie sitting astride a snarling, flaming bull; which pretty much sums up her approach to the music industry these days.

When you play gigs to packed halls across the Southern States most nights of the week and you regularly get invited to tour Europe and Japan but the Record Labels still won’t touch you with a bargepole because ‘your type of music doesn’t sell anymore’, what else do you do but rally the troops and make an album financed by your fans. Which is what Ms Collins has done, and those Record Executives should be ashamed of themselves.

The opening lines on the album are; ‘Hey Mister/what comes around goes around/now all the little hipsters/digging on the old sound’. Guess who that’s aimed at! And boy does it set the tone for 12 Sex fuelled Country Rock songs that are as good as anything I’ve heard in the last 20 years.

I won’t do ya like that is an ode to the new man in her life who is sill licking his wounds after being tossed out ‘like the morning paper’ and as Stacie tells him; ‘One girls trash is another girls treasure’. How sweet is that?

Which eventually leads us to A Good Man (is like a secret); when Stacie advises her ‘friend’ not to brag about her new man too much, ‘Cuz some little hussy will try to steal him away’ because that’s what women do. It must be a complicated life being young these days.

The Stacie Collins Band don’t just rock as if their tails are on fire; on Cool they manage to slow things down and get a little funky on a message to a famous ex-lover; telling him that he might have all of the moves now and the long black cars but she knows all his little secrets and they will stay secrets because she’s the Cool one and doesn’t even want him anymore.

Although I absolutely love Stacie’s fast stuff, the actual best song on here is the broken hearted and subsequent misery soaked ballad; It Hurts to Breathe which is as good a Country weepie as it gets and I won’t be surprised if one of the Nashville A Listers pick up on it soon and make it a smash hit.

I can’t let you go without telling you about the actual band; and what a band! The sassy Stacie Collins on vocals and harp plays alongside husband/bassist Al Collins and guitar legend Warner E Hodges from Jason and the Scorchers, Jimmy Lester AKA the snappiest drummer in Nashville  and the Genius that is Dan Baird not only supplies guitar licks but an overall production that puts Muscle Shoals to shame.

If you like your Country with a side order of Soulful Fire and Brimstone, this is the gal and the album for you.