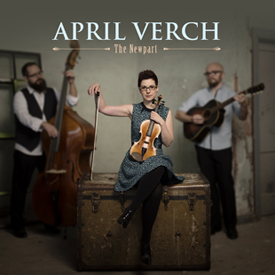 Had I been in what used to be known as a ‘Record Shop’ the cover of this album could well have caught my eyes and possibly made me ask the ‘man behind the counter’ (as they used to be known); to play the first track; which in my case would have been fatal as it’s a mournful instrumental featuring the fiddle, called Belle Election; and it isn’t my cup of tea at all.

Track two; If You Hadn’t Gone Away, on the other hand is a rather delightful waltz time interpretation of a song from 1925 and really showcases Verch’s pearlescent voice and exquisite violin playing..

Frustratingly the title track is a rather superb instrumental and Verch’s fiddle playing is superb; but the track follows Bring Your Clothes Back Home, which could be a nicely cutesy song; but alongside some great Double Bass, uses Verch’s tap dancing as an instrument! Things get worse on The Gilchrist which is two minutes and thirty nine seconds of Verch step-dancing; yep….no instruments just the sound of shoe on wood.

There is no doubting the quality of April Verch’s fiddle playing and her voice is exquisite at times; and a couple of songs, especially Montana Call bear repeated listening, but some of the other choices and that damn step-dancing just left me cold.