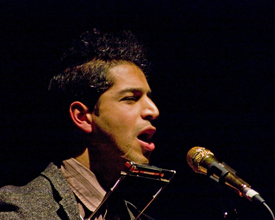 Music lovers go to concerts for a million different reasons; and tonight I attended because a week before there was the distinct possibility that there would be as many people on stage as paying customers in the hall leaving me both intrigued and confused. As show-time got nearer a heady five tickets had been sold; but thankfully there was a reasonable ‘walk up’ to save the day.

Why would that be the case? Vikesh Kapoor’s debut album The Ballad of Willy Robins was very well received last year by the music press and national newspapers alike, and the singer himself has thrown himself into promoting the album on local and national radio and even TV. There’s no accounting for taste; is there?

I’d not heard of support act, John Blek but was very pleasantly surprised by the quality of his writing and the way he delivered the songs themselves; as he said when he introduced himself; “Vikesh’s songs are about the working mans struggles; mine are about sex and drinking!”

Out of his twelve songs I put two stars next to seven of them which is a very rare thing. Calling Out Your Name was simply beautiful and it’s a brave man who tackles domestic abuse; but Blek’s Mrs. Black (and Blue Eyes) was quite staggering in it’s powerful simplicity.

Not just a winsomely handsome singer, the Irishman is more than capable on the guitar; and also surprised the sparse crowd by putting that instrument down for a punchy love song called Crucify Me which was accompanied by him keeping time on a tambourine.

I could cheerfully have listened to him play for another hour; and I’m pretty sure he will be back very soon, especially after his final song The Barman, The Barfly and Me which could easily have been written by someone like Richard Thompson. 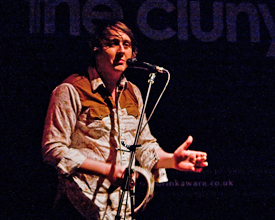 The turnaround was so quick a couple of smokers and drinkers managed to miss Kapoor’s opening song; Lightning Rod.

He followed that with a self-depreciating story of discovering Pete Seeger’s Dinks Song which he turned around and added several new verses to; culminating with his song, Down By The River which was the first of the stars aligning for a really special gig.

Vikesh Kapoor is very much a ‘one off’ but it’s very easy to draw comparisons with the young Bobby Dylan; especially as he even looks a bit like him circa John Wesley Harding.

His own songs are invariably stories and demand to be listened to intently; which was easily achieved in these intimate surroundings; but will be a lot more difficult at a Festival.

Quite early on he threw a curve ball by re-interpreting Mack the Knife which really highlighted his intricate guitar picking.

These days singer-songwriters are pigeon-holed in a million different ways; but Kapoor is a Folk Singer in the traditional manner; taking on some difficult subjects and bringing them to the attention of the world; such was the epic News Press Scare which was a story about the internet ‘breaking’ and had several people nodding their heads to the beat; but possibly the sentiment too.

While not previously being aux fait with his songs; the droll but beautiful I’m Still Here alone had me buying his album The Ballad of Willy Robbins at the end of the evening; and that title track with its chorus which came up from Vikesh’s socks was a truly great song.

The gig came to a wonderful ending when Kapoor invited John Blek on-stage to accompany him on I Never Knew What I Saw in You; and their voices gelled as well as Crosby and Still; honestly, they really where that good.

Not the longest concert I’ve ever seen; an hour from start to finish but an awful lot was shoe horned in and I saw and heard enough to know I’d witnessed something really special in its infancy. 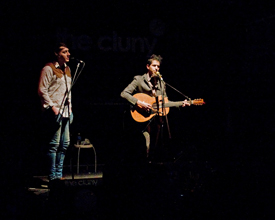