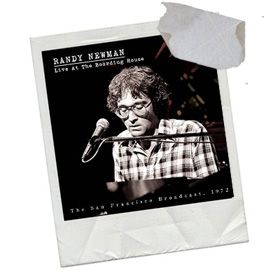 Who Said Americans Don’t Do Irony?

I would have been about thirteen or fourteen in 1972 when I began surreptitiously borrowing my elder brothers’ ‘big-boy’ LP’s. Many were and still are classics of the Rock and Folk genres; but very few affected me as much as Randy Newman Live.
I was used to Pop music in all its glory and had recently developed a taste for what we would know as Blues-Rock; but one album baffled, amused and intrigued me more than the rest – Randy Newman Live.
His piano playing was basic, to say the least, most of the jokes went over my head and his voice was akin to a duck farting under water; yet I can still quote the chatter verbatim 45 years later.
This album was recorded the following year from a concert broadcast on a SF Radio Station, and includes a few extra songs from the recently released Sail Away (which was to become hailed as his Masterpiece).
The album opens with Tom Donahue introducing Newman and it’s evident from the tone of his voice he’s a big fan; then the unmistakable opening notes of Lovers Prayer filter through the airwaves.
Unlike the previous Live Album Newman sounds a lot more comfortable in between songs, joking in a self-depreciating manner which was to become a trademark for the Californian; yet sounded revolutionary at the time.
While historians will hark back to the bawdy Blues tunes of the 20’s and 30’s; but I can’t imagine anyone listening to this that night had heard anything remotely like You Can Leave Your Hat On before. Yet it’s now heard daily on Gold/Classic radio channels. It’s a similar story with Yellow Man. We get the joke now; but back then ?????
There a couple of songs I’d not heard before; Beehive State, Linda and Suzanne all of which are performed in Newman’s timeless style and full of sharp, pithy lines that go way over your head if you’re not listening carefully.
If you are a fan too you will know many of the songs backwards; but who among us will ever get tired of hearing Political Science, God’s Song, Sail Away and my own personal favourite….It’s Lonely At The Top.
All 21 tracks are minor classics and will have fans like Donahue and myself going weak at the knees every time we put the disc in a player. Sadly it’s unlikely that this album will not make one new fan for the greatest songwriter that American Popular Music has produced in the last 50 years of.