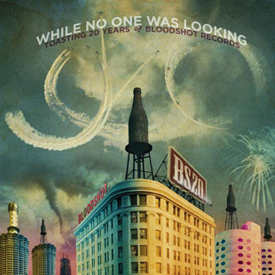 The home of Alt. Country throws a party

I still can’t put an actual date or even an event that saw my conversion to all things Alt. Country; but buying the Various Artists STRAIGHT OUTTA BOONE COUNTY LP on Bloodshot Records in 1998 had to be a step on my Damascene conversion; if nothing else it introduced me to a label that has continued to drain my wallet and bring my intense pleasure on a regular basis.

To celebrate their 20th Birthday Bloodshot are releasing this Dbl CD/LP featuring 38 cover versions of songs on the label and it will be a very black heart that doesn’t discover a gem or two hiding in the grooves.

As has always been the case; the bands and singers cover every conceivable description of Americana/Alt. Country with stalwarts like Chuck Prophet, Charlie Parr, Handsome Family and Andrew Bird sharing space with a host of (relative) newcomers.

VA albums have always been ‘hit and miss’ affairs from every label; but Bloodshot have a hit rate way above the average and here Ted Leo’s take on the Waco Brothers Dragging My Own Tombstone is my personal Jewel in the Crown, with Daniel Romano’s cool interpretation Strange Birds; originally by Jon Langford and The Sadies running it a close second.

Honourable mentions must also go to The Handsome Family reimagining $1,000 Car, Jerry David DeCicca’s delicate version of Alejandro Escovedo’s Broken Bottle and the North Carolina Music Love Army nearly steal the show with an electrifying Stick to the Plan;  which sounds nothing like Graham Parker’s original.

With 38 tracks spread over the two discs, not everything works with too many Indie Bands being included for my own personal liking; but then again if I gave this to a Hipster with an Appalachian farmers’ beard I’m sure they would be the tracks he’d like instead.

Out of the artists I didn’t already know, I have already checked out Koji, Carolyn Mark and The Minus 5 in exactly the way I have done with every other VA album I’ve bought from Bloodshot over the years.