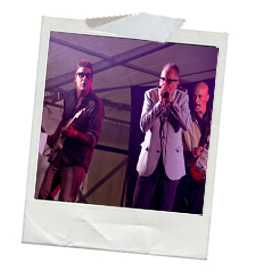 I can only apologise as this was meant to be a full review of the full Stanley Blues Festival; but a minor family crisis meant I arrived midway through Struggle Buggy’s set but still got to see Paul Lamb and the King Snakes in all their glory.
Although the next couple of paragraphs are ‘hear say’ I’m pretty confident they are 100% on the mark.
The afternoon opened with local lads The King Bees and their righteous 50’s and 60’s Rhythm and Blues. I’ve seen them several times in the last couple of years and they always remind me of the Yardbirds and The Animals in their choice of songs and the fiery way they deliver them; and today was no different. A very well informed friend even joked that singer Scott Taylor may even have ‘thrown down a marker’ to headliner Paul Lamb the way he blew his mouth-harp.
Next up was No Time For Jive who have been tearing up the local Blues and Pub-Rock scene for more years than I can remember. A young lady who’d not heard of them before went all ‘googly eyed’ later when I asked her Dad what they’d been like. I think it’s fair to say she’s now a Blues convert.
My biggest disappointment was missing the Mitch Laddie Band, as they have a new album coming out in October and the whispers after this scorching performance say it’s going to be a doozy! Two completely unconnected friends both mentioned Stevie Ray Vaughan when they talked about Mitch’s set; so I guess it was pretty impressive.
He’s not been in the best of health lately so Mr. Johnny Dickinson took to the stage solo with only a lap-steel for company; and blew the roof off the tent! Apparently quite a few women danced their socks of as grown men looked on in awe (that’s a quote from Brian btw). 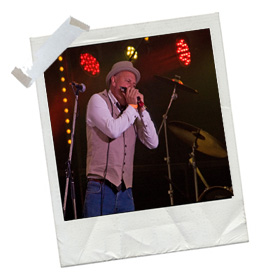 I did see Struggle Buggy for about twenty minutes and was very impressed. A heady mixture of Country Blues, Ragtime and Jug Band music the magnificently attired quartet kicked up quite a storm as the families started drifting away for their tea; and the hardy Blues fans moved forward in the marquee drinks in hand.
I first encountered Paul Lamb when he was harp player #1 in the Blues Burglars; who were the second best band to ever come out of Newcastle Upon Tyne. The memory of Paul, Martin Fletcher on harp #2 and Billy Sharp front of a packed beyond capacity Broken Doll still makes my heart skip a beat.
Tonight was the first time I’ve seen Paul with son Ryan on guitar; but it certainly won’t be the last. The set was predominantly from the bands latest album Hole In The Wall but every song sounded like I’d known them for years; which is a testament to Paul’s songwriting and the classic template that the band embrace.
Looking like a kid on the last day of school; I sweat their were sparks coming out of Lamb’s harmonica during opening song Hole in the Wall; and Ryan Lamb’s fluid guitar licks weren’t too shabby either.
The 90 minute set was stretched to nearly two hours as the King Snakes covered every gamut of the Blues from the rocking Jumpin’ Little Judy, through the slow and soulful Really Got a Hold on You and ending with the dark bass boogie lines that filled Person to See.
While this was a Master-class in harmonica playing Paul has a wonderful voice too; best showcased on the duet with Ryan; Ida Mae.
No band can get this good without a powerful rhythm section and the unsung heroes Rod Demick and Dino Coccia deserve a mention in despatches as does singer and rhythm guitarist Chad Strenz; he of the husky voice and golden tonsils.
Highlights? Where do I stop? Hootin’ and Tootin’ (a harmonica instrumental dedicated to Sonny Terry) had Lamb leaving the stage to wander around the marquee sans amplification. It was a treat; and very funny when he couldn’t get out of the photographers pit without the help of a voluptuous security lady. Possibly the best was kept until last; which may be an odd thing to say because it was an acapella version of Midnight Special (Shine a Light) which had all five band members harmonising as Paul poured his heart and Soul out.
Even though the Stanley Blues Festival was ‘free entry’ it was still a testament to Stanley Ents. Derwentside Council and my mate Ben, that the police estimated a peak of 1500 people, including a 40th Birthday and an Engagement Party, were on the site at one stage. Congratulations to one and all.