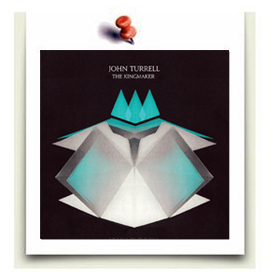 John Turrell is the singer in Funky Groovesters Smoove and Turrell from Newcastle, England and has drawn comparisons with Jay K from Jamiroquai and Mick Hucknall from Simply Red; but on this his solo debut he draws from his roots to create a Soulful album that is full of raw Blues.

The album opens with a song about the futility of boring office work; To The City and the need to break free and has guitar breaks worthy of Prince at his best.

Wrong Time was released as a single earlier this year and it’s easy to see why it picked up National airplay with its Stax like bass lines and a Hammond organ that drives through the middle like finely tuned Aston Martin as Turrell pleads with the love of his life.

Day in Day Out is a piano let Blues tune comes from the very pits of the stomach and is another song that will resonate with anyone who is ‘office fodder’ and the title comes from a piece of graffiti painted on a footbridge that John had to slowly drive past every morning on his way to the drudgery of a 9-5 job; when he could only dream of a career in music.

Stella Maris is such a cool slice of funky Soul I had to check the sleeve-notes to see if it was a lost Stevie Wonder track; but it’s not. It is written by John’s own fair hand and that comes across in his voice as he honours the strong women in his family with a love song to them all.

With his band Smoove and Turrell as well as his side line the Fantasy Funk Band John has supported many great names and bands in the Soul; Funk and dance market including Chic whose influence is written right title track The Kingmaker making it a Supercool stomping Northern Soulful Bluesy tune.

The album ends with another slow burning Blues tune that has the Hammond at it’s core; Home about the temptations a man faces when out on the road; but mercifully Turrell appears to have left them behind him many years ago and now thinks of his daughters when the Devil appears on his shoulder.

With Charles Bradley and Eli ‘Paperboy’ Reed forging a path for Soulful Blues; not unlike The Kingmaker I heartily recommend you to have a listen to John Turrell before he becomes too cool to like.