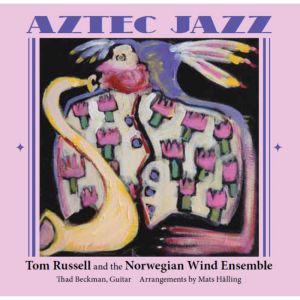 Tom Russell is; arguably, Americana Music’s most accomplished, yet most under rated and under valued artiste and, indeed contemporary artist. He’s been recording since 1976 and touring long before that; with the quality of his writing possibly getting better with age; but his early work, which is often featured in his stage act, has stood the test of time better than many of his contempories.

Russell’s songs about his adventures around the Globe and closer to home in the Flatlands of America have always had a cinematic feel to them; and now with the Norwegian Wind Ensemble providing a stunning backdrop on some of his more recent songs, they sound like a film soundtrack.

Recorded live, in May 2012 AZTEC JAZZ opens with a glorious orchestral swooping introduction, before Tom softly launches into Love Abides from MESABI and the song takes on a whole new life and sets the tone for an amazing journey through some of his finest songs.

The second track; the much loved, Nina Simone the Norwegian Wind Orchestra take on the role of a mournful Mariachi Band on a version that will delight his fans every time they hear it.

Criminology opens with an outstanding Thad Beckman guitar solo and the Orchestra goes on to give the song a Big Band feel; which really suits this tale of Russell’s time in Africa in the early 1970’s.

As I said earlier, Russell’s songs have always had a cinematic feel; and this adaptation of Stealing Electricity sounds like it should have John Wayne or Audie Murphy galloping across a vast panorama in glorious Technicolour; or that could just be my imagination.

Long term fans will be intrigued by the waltz like St. Olav’s Gate; as it is one of Russell’s ‘signature songs,’ but they needn’t worry; as this gorgeous version stands shoulder to shoulder with the original and many will actually prefer it.

It’s not made clear if this is an abbreviated version of the concert as there are no stories introducing the songs; and anyone who has ever seen him perform will testify that the anecdotes are often as good as the songs; and with the benefit of hindsight there are several older songs that could easily have benefited from an orchestral makeover; but perhaps they can be kept for volume II on another day.

AZTEC JAZZ is an intriguing concept; marrying one of America’s finest story tellers with an orchestra; and a woodwind one at that; but in many ways it works. The album is unlikely to win Russell any new fans; but I’m pretty sure it will please his loyal fans for years to come.