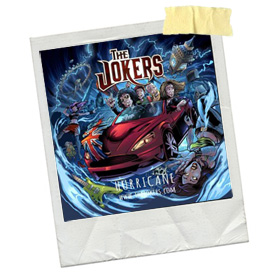 A Whole Lot of Rosy British Rock at it’s Finest.

I would never in a million years have bought this album from seeing the cover in a Record Shop as the cartoon artwork reminds me of all those horrible Ska-Punks that infested my record player in the 90’s; but once you get past that this album is a veritable DOOZY!
Opening track Run 4 Cover could easily have been a Who out-take from the Baba O’Reilly days and the restrained power has impressed me every time I’ve heard it. A cracking way to start an album of this ilk.
The title track comes next, with Hurricane featuring some really funky guitar licks from Paul Hurst and for the first; but not for the last time singer Wane Parry sounds uncannily like the Aussie Rock God, Bon Scott in the way he spits out the lyrics.
The Jokers are four Liverpool lads; and on this album it sounds like they are having the time of their lives. Even without seeing a photo you just know they are a heady mixture of flowing locks, stone washed denim and more than their fair share of leather. But that’s exactly what I want from a band that can bang out songs like Angel, Silver City and Her Word is Love without even the merest hint of irony. These songs are from the heart, and I admire them for that.
As I expected the Rockers are balanced with a handful of sexy ballads with She’s On Fire sounding like a lights down show stopper when played live; and Dream opens with some intricate fretwork as Parry goes for a Robert Plant (lite) performance; and it works.
The actual album ends with the quaintly titled Rockerman, which features some clasy guitar playing and builds up to a powerful close.
My copy has four bonus tracks that include Dr Rock Head, Let it Rock and Rock n Roll is Alive – do you see a pattern emerging here? Let’s face it, subtlety in this area never did AC/DC any harm did it?
The Jokers wear their influences on their sleeves; at time leaking Free, AC/DC, Zep, The Who and even the Quireboys into their sound; but there’s absolutely nothing wrong with that as the end result is well worth seeking out, if Classic British Blues-Rock is your ‘thing.’