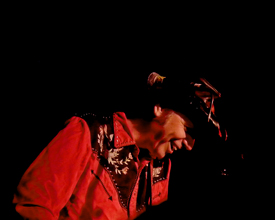 I’ve been a Jason & the Scorchers fan for many years; so the opportunity to see their singer Jason Ringenberg play a rare solo set; when I happened to be in London Town was a treat that I couldn’t miss; even though it was the week of the now infamous ‘riots’.
The Green Note Café appears on a lot of tour itineraries these days so I was stunned to see how small it was. To call it ‘intimate’ would be an gross exaggeration as it is tiny, but turned out to be the perfect venue for tonight’s concert.

With no support act Jason; wearing a bright red rhinestone covered shirt and his trademark battered Stetson appeared from behind the curtain that splits the restaurant into two and went straight into She’s The Life of The Party. The sound from the tiny PA was crystal clear and set the scene for a pretty special night.

As the cheers died down Ringenberg told us that he didn’t have a set list and would (try to) play anything and everything that was called out.

This was a clever ploy and got a few laughs as increasingly obscure songs were suggested but with the aid of some crib sheets he managed magnificently.

Jason was on good form all night joking with the audience; who couldn’t have been any closer to the stage and the fan’s faces, as he sang tracks like Bible and a Gun and Jimmie Rogers Last Blue Yodel and then his crazy version of Honky Tonk Maniac From Mars was worth the entrance fee alone.

As you’d expect there were plenty of requests for Scorchers tracks and Mona Lee and Twang Town Blues from last years HALCYON DAYS album took on an added poignancy when sang solo; plus they highlighted what a good guitar player Jason is.

The second set was even better than the first with the singer now choosing the songs to suit the mood of the evening. He started with a cool version of Absolutely Sweet Marie then suggested a song he hadn’t sung in a lot of years as it needed a long intro to put it into context. Obviously the audience let him know they wanted to hear whatever it was and we then got a 20 minute story about the Nez Perce Native American tribe and their non-war with the US Army which led us into a stunning version of Chief Joseph’s Last Dream.

Another ong from EMPIRE BUILDERS that demanded an introductory  ‘story’ was for the tale,  Eddie Rode The Orphan Train  about a train that would leave New York and kept stopping at large and small towns until the cargo of orphan children was fully despatched.  It was played out to silence and there was plenty of sniffling in the applause at the end.

Jason even included a song from his Alter-ego ‘Farmer Jason’ – The Tractor Goes Chug, Chug, Chug which had the packed 60 or so fans singing along with the chorus, before he launched into his favourite ever ‘English song’ – England Swings (like a pendulum do)! A great night like this couldn’t end with anything other than the Scorchers signature tune Broken Whisky Glass which merged into Lost Highway and ended with huge cheers from the crowd.

Although he’d gone way over the curfew Jason was called back for one last ‘folk song’ – I Wanna Be Sedated by the Ramones; which was a fitting end to a red hot gig from one of Alt-Country’s finest singers.