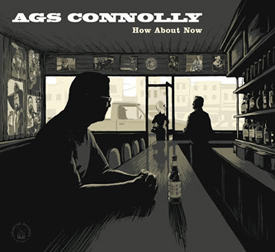 I’m not even sure that there is a British ‘Country Scene’ to burst into; but if there was Ags Connolly surely did that earlier this year; when this; his debut album finally hit the shops after his name had been bandied about in several influential magazines and even National Newspapers ‘Next Big Thing’ lists the previous December.

Was the end result worth waiting for you ask? Yes…..and possibly no.

Yes, because what Ags Connolly does he does incredibly well; citing Dale Watson, Billy Joe Shaver, Willie and Waylon as influences he certainly fits into the Outlaw category quite easily; with album opener When Country Was Proud being an instant crowd pleaser, telling us how good Country was in the olden golden days of Willie, Waylon and even Hank Snow; but if that’s the case where does it leave Connolly and his ilk today?

I’m sure that song will get drunken cheers at concerts; but the songwriter has much more to offer on songs like A Good Memory For Pain and I Hoped You Wouldn’t Be Here which both take the classic Country song template but shake it about and give us something fresh and interesting.

While HOW ABOUT NOW certainly bares repeated listening; at home and in the car, the songs are pretty one paced; with barely anything apart from The Dim and Distant Past attempting to get out of second gear; and perhaps some of the production could have been a little bit sharper, highlighting Connolly’s low Southern drawl.

Connolly has a good way with words and his soft delivery on How About Now is as good a bittersweet love song as anyone else has produced in the Southern States this year; and his ode to a Country hero – I Saw James Hand is not just clever; articulate and well written but sung straight from the heart, proving he doesn’t need ‘lazy’ songs like the opener When Country Was Proud.

With songs like many of these Connolly and indeed the British Country Music scene has a lot to be proud of NOW.

One thought on “Ags Connolly – How About Now”