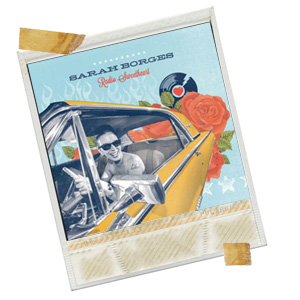 The artwork on the cover was a clue as to what I could expect when I dropped the metaphorical needle onto the CD.  Fifty minutes later when I pressed “repeat”, I was still smiling and desperately trying to stop my feet from tapping. The first word that popped into my mind during opener “Girl with a Bow” was “Ooh!”  — there’s a tight groove for three solid minutes as Sarah and her cohorts tap into the spirit of Kitty Wells, on what should become a rockabilly standard in years to come.

Next up is the title track, which features some restrained but pretty dirty guitar licks and crashing cymbals. Borges desperately tries to get her message about unrequited love across without letting him know exactly how much she cared.

My favourite track by a country mile is the yearning love song “Think of What You’ve Done”, which will probably sound just as good when played late at night as it will blaring out of the car stereo when beamed from a radio station on a sunny afternoon. The album ends with a couple of belting country-flavoured rockers – “Heavy Dreams” and “Record on Repeat”, which I just know are going to sound even better when played live.

This is meant as a compliment; but the more I’ve played the album the more it reminded me of Different Light by The Bangles, which was never off my record player in 1986. I guess this is because Borges and producer Steve Berlin have managed to capture the essence of rock AND roll, country, and even alt. country. They sprinkled it with the stardust we call commerciality, which is a rare treat. They have made Radio Sweetheart appeal to aging hipsters like me and still sound cool enough for college kids around the world, too.