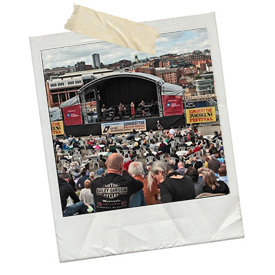 SummerTyne #10
Sage Gateshead
17th – 19th July 2015
What a weekend! How do those fine folks at the Sage Gateshead and Jumping Hot Club do it year after year, after year? Over the course of the three days I wandered around photographing and talking to music fans of all ages and persuasions and, by common consensus, the balance of acts this year was excellent; possibly the best ever.
Friday
As ever Friday afternoon was given over to local North Eastern acts covering the gamut of Roots and Americana music and by golly gosh, we’ve got some diamonds in the rough up here.
At noon Shipcote strode to the microphone and got the weekend on a roll by introducing quirky songstress Caroline Mary who was soon followed with a cool blast of 60’s West Coast harmonious Country Rock from El Cid. Trust me; this time next year these ‘kids’ are so good they could and should be playing one of the halls inside Sage Gateshead.
The sun was shining and there wasn’t an empty seat in front of the stage and the grassy knoll known as Shipcote Hill was filling up nicely as Michael Littlefield sauntered onto the stage. Dressed in a natty sports jacket, smart trousers and shirt and sporting some delightful black & white co-respondent shoes the Blues Boy from the Ouseburn Delta then wowed the audience with an array of Delta Blues from the likes of Skip James and Leadbelly.
Friends of mine who hadn’t seen him before were still talking about his intricate guitar skills and amazing voice the following day.
Surely things had to go down hill now? Nope! Next up were Northumberland’s finest Folk-Rock band Gilded Thieves. Looking as if they had been beamed in by a time machine straight from Woodstock, their harmonies and musicianship were exemplary for ones so young. Two songs in particular stood out; Run and Siren (?) both featuring excellent guitar and violin interplay. Yet another name to put in the diary; and it was still only 4pm!
I have to make a confession here; as I’ve had a crush on Miss Mary ever since she played a guest spot at the Daintees Xmas Party a couple of years ago. For some reason she was missing her normal Rockabilly band the, Mister Rights; but instead formed a duo with living legend Joe Guillan on guitar. I will be diplomatic here and say the songs were ‘under rehearsed;’ but don’t let that put you off seeing her band; it will be a humdinger of a night; especially after hearing her blistering version of Fujiyama Mama.
By the time King Size Voodoo Traveller made their appearance at 5pm the crowd was by far the largest ever witnessed on a Friday afternoon and the KSVT set list of Prog infused rock covers went down well with a ‘well refreshed’ audience. With no CD’s or merchandise to speak of the hirsute and fulsome figured singer proceeded to give the crowd an impromptu striptease as a substitute. Very funny, but an image I’m still struggling to dismiss from my brain.
Two highlights spring to mind – changing the lyrics to Guitar Town to include Ashington and when the singer got over 1,000 people to holler “Bonjour!” to 1o French students standing watching.
Not for the first time the afternoon came to a close with the coolest Bluegrass band ever produced along the banks of the Tyne Delta or the Blue Hills of Derwentside. Their mish-mash of popular beat songs set to old-timey Country tunes had a whole host of people up on their feet dancing.
After half an hour I had to scurry inside the building for the ‘Press Launch’ (i.e. Free Beer and bait) which featured the magnificent McCrary Sisters performing three stunning a’ cappella Gospel Songs. 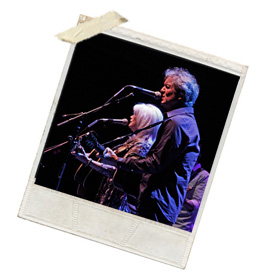 From there it was straight into Hall I to see Emmylou Harris and Rodney Crowell.
I saw the duo perform here a couple of years ago and really enjoyed seeing them; but thought Rodney was a bit ‘restrained’ all evening.
Tonight nothing could have been further from the truth. Always allowing the silver haired songstress the limelight; Crowell occasionally took lead himself and Bring it on Home To Memphis was astounding – a real crowd pleaser in every sense.
Emmylou has always had one of the finest voices in Country music and over the last couple of albums she appears to have ‘grown into the new timbre’ possibly making her the genre’s Grande Dame?
When she duetted with Rodney on Love Hurts; it made me wonder what might it have sounded like if Gram had been a clean living boy and been on the stage tonight. He wasn’t and the couple made it their own; even drawing a standing ovation from pockets in the sold out venue.
I own six Emmylou albums and five from Rodney; but the only one I played prior to this weekend was Old Yellow Moon and I’m pleased to report that they sang several songs tonight; plus a smattering from the latest – The Travelling Kind.
As a man of a ‘certain age’ I absolutely loved tonight’s rendition of Back When We Were Beautiful. The show had been split into two sections and the two hours flew by; and Emmylou, Rodney and their hot band were quite rightly called back for an encore; and Stars on the Water brought an enchanting concert to a lovely close.
During the intermission I flitted along the corridor to see the legendary singer-songwriters Dan Penn & Spooner Oldham (review to follow).
At the end of those concerts my photo-pass meant I managed to pop in to see three songs from the Felice Brothers (not my thing – too whiny; but the audience all looked in awe and on Saturday I was privy to several animated conversations praising the gig). 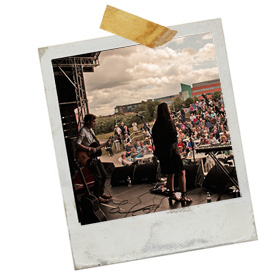 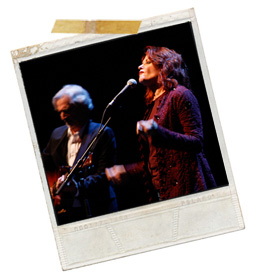 Over the years I have been vocally indifferent to Rosanne Cash’s music; but within three songs tonight I was won over. How could I be so very wrong for so long?
With no band to aid them and just two acoustic guitars Rosanne and husband John Leventhal took my breath away with the beautiful simplicity of their songs all night; and Cash’s voice was so warm and clear I ordered three albums the following day!
The latest album The River and the Thread made up the bulk of the songs tonight; opening with Modern Blue and following it with The Sunken Lands with was introduced with a very personal story about her paternal Grandparents.
Baring in mind how I felt on entering the Hall, the majority of songs have 2 or 3 stars next to them in my notebook. Of the 3 star songs Tennessee Flat Top Box, Dreams Are Not My Own and the ever-wonderful Long Black Veil were all spine tinglingly good. But it was her rendition of arguably the greatest Country song of all time, Ode to Billie Joe that brought tears to my eyes and had my wife nudging me as she did too when Leventhal de-tuned his guitar for the last couple of notes to add even extra pathos.
Five minutes after the concert ended I nipped in to Hall 2 to photograph Naomi Shelton and the Gospel Queens while my wife watched The Black Feathers in the Concourse.
Sadly the crowd for Naomi Shelton was tiny but the band hit a groove immediately and when the singer finally made her entrance everyone (inc. me) seemed to have their Soul Shoes on.
When I finally found my wife the concourse was the fullest I’d seen it all day and the Feathers were going down a treat.
An excellent end to another wonderful day of music. 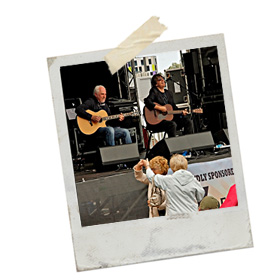 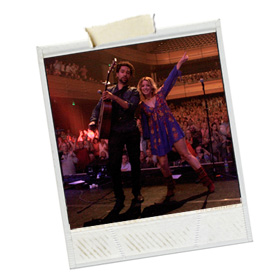 Hey ho; that still left the current ‘darlings off BBC Radio 2’ The Shires. Yet again any pre-conceptions were blown right out of the water from the get go.
This time last year they were shoe-horned into a 20 minute slot on the café stage and tonight they probably had more people in Hall II than Rosanne Cash the previous evening; and I was impressed that she had attracted nearly 2000 fans.
How good; and indeed how cool are the Shires? Every song was slick and assured but better and catchier than anything I’ve heard out of that there Nashville in 5 years or more.
Crissie and Ben sound as if they’ve been singing together since pre-school rather than the couple of years it really is.
Opening with the rousing Nashville Grey Skies the energy never stopped all evening with nearly every song being a sing-along; and even if it wasn’t meant to be the fans sang along anywise.
The title track of their debut album Brave was a doozy as was the fan favourite Friday Night; but their ballads show they have strength in depth; especially Black & White.
But and it’s not a very big ‘but’ the highlight for me was Made in England. Most songwriters who move away from home eventually write something similar; but this is the best I’ve heard – never mawkish or jingoistic but from deep, very deep in the heart and their souls.
After three 11 hour shifts I was actually buzzing with excitement as I made my way out of the Hall. As we slowly made our way through the crowds we were serenaded by the ‘mystery star’ who was closing the SummerTyne Festival – only Jess and the Bandits.
What a weekend – and next year’s dates are already in the diary!
Phot-sets