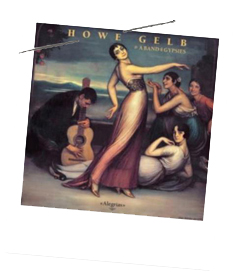 The Sandman creates his masterpiece

I’ve never been a particularly big fan of Giant Sand or Howe Gelb’s eclectic solo work but on this; his 21st (?) solo outing he blends his trademark Tex-Mex Desert music with a band of Spanish Gypsies playing slow and sexy flamenco and the result is staggering in its brilliance.

Individually every track sounds outstanding but when heard in one complete offering (which is a rarity for the download generation) you know that you are listening to something very very special.

Cowboy Boots on Cobble Stone and The Hangin’ Judge conjure up images of Sergio Leone Western movies at their bleakest and Broken Bird & the Ghost River; with Howe’s voice at its gruffest/sweetest along with the beautiful guitar playing of Raimundo Amador in the background is so full of beauty and grace it could be Chet Baker fronting Ry Cooder and the Tijuana Brass.

The reworking of the Giant Sand song When the Wind Turns the Skin to Leather initially sounds like a 1960’s Tex-Mex Pop tune 45 played at 33rpm until you listen to the haunting lyrics and you will keep coming back trying to decipher the hidden meanings; but you will fail miserably.

ALEGRIAS was recorded over several years on a rooftop in Cordoba, Spain but sounds like it was done in one magical take with the sun setting while gazing over a beautiful Andalucía vista.
My favourite song; the scary Tom Waitsian Saint Conformity also manages to contain the best couplet I’ve heard in many a year: “She went from being a small town looker / to dressing like an optimistic myopic hooker”- GENIUS!

Some of my favourite albums of the last 15 years have been from Tom Waits, Ry Cooder, Tom Russell, Robbie Robertson and Billy Bob Thornton and they are all a bit like this with the singer virtually talking over the lo-fi backbeat but ALEGRIAS tops everything that came before it with Gelb’s mixing traditional Country and Spanish Flamenco sounds then seamlessly sliding in his own ‘special formula’ to create a brand new sound that defies categorisation; until you translate ALEGRIAS to English and it becomes……. Joy.