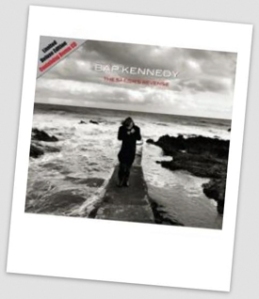 Bap Kennedy has the ability to take the merest thread of a story and spin it into a tale of such epic proportions it leaves the casual listener dumbfounded at what comes out of their speakers. This is his 10th album since going solo in 1996 and is, by far his strongest and most mature to date.

After living in London for the nearly 20 years Bap and wife Brenda have moved back to outskirts of Belfast and the transition can be heard in every song on THE SAILORS REVENGE.

The album opens with a beautiful Irish folk song calledShimnavale which was written in a village of the same name that sits in the shadow of mountains while still looking out to the sea and it sounds like a man knowing he’s made the right decision to come home.

An early contender for ‘best song’ is Jimmy Sanchez, which is about the youngest of the Chilean miners and will leave you with a nice warm glow.

The jaunty tune, Please Return to Jesus will resonate with many Catholics or indeed any lapsed Christian who has questioned their own midlife lack of Faith as they grow older. The narrator informs us that he’s had Please Return to Jesustattooed above his heart – just to be on the safe side.

As always Kennedy inhabits a Blue Collar Working Man like only the great songwriters can, and he tells the tale of an old man looking back on his life and the choices that he had to make to feed his family with great sincerity and gravitas.

The album draws to a close with one of the sweetest Irish love songs I think I’ve ever heard – The Beauty of You. I’m not going to spoil it by describing it in minute detail – buy it, find it, download it – then smile and cry in equal measures.

THE SAILORS REVENGE comes to an end with yet another beautiful song and tune, Celtic Sea which wraps everything up in a nice emerald green bow.

If you are still unsure about buying this album; think Avalon Sunset period Van Morrison but with a nicer voice.

PS. Early copies include a bonus CD of Baps favourite songs; from his earlier albums.