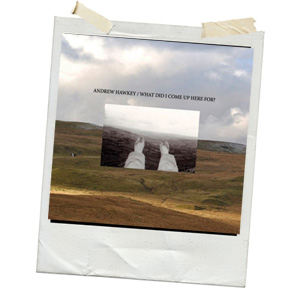 Andrew Hawkey
What Did I Come Up Here For?
Mole Lodge Records
MLCD001

Usually we get over excited by age when it’s applied to young musicians; but in the case of Andrew Hawkey it’s because he’s at the other end of the spectrum. Now 73 the singer-songwriter is finally releasing his debut album – honestly.
Like many of his ilk Andrew has made a living as a jobbing-musician, self-releasing a cassette in 1982 and a 6 track 45rpm EP in ’83 to sell at gigs, then……nothing until this album in 2015.
Let me tell you it’s well worth the wait.
Erring on the easy-listening side of Americana/Folk Hawkey’s voice, often shrouded in reverb is warmly delightful and the musicianship throughout is worthy of the big boys in them there London studios.
Strange as this may seem the long opening note of the first track Hold On, Let Go captured my attention and the softly Gothic song is imaginative and thought provoking, which is a rarity in my experience.
It’s a similar tale with No Shadow and Turn Around; both clever songs that will effect different people in different ways; but they will undoubtedly effect everyone who hears them.
Hawkey’s voice is the equivalent of a warm cup of tea or a big hug from a favourite Aunt; it makes you feel safe even though the subject matter may be a bit scary. This is especially true on the stark piano led song Forgiveness; which has echoes of Randy Newman and (early) Billy Joel in its directness and also the poetic Wild Flowers.
My favourite track; stands out like a sore thumb as it’s the most upbeat thing here; but that’s not to put down anything else; but Apple Green is simply beautiful; and if anyone with half an ear on Radio hears it will become a daytime favourite. Trust me.
What Did I Come Up Here For? Is grown-up music for people who appreciate the intricacies of a well constructed and delivered song. Fans of Leonard Cohen, Van Morrison and Randy Newman will love this from start to finish.