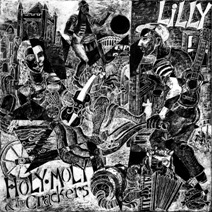 I first encountered Holy Moly and the Crackers at a Music Festival two years ago when it would be fair to say they ‘stole the show.’ Soon afterwards they released their debut album FIRST AVENUE which was critically acclaimed but cruelly ignored by the nation’s radio stations.

Holy Moly and the Crackers are literally fizzing with ideas; no sooner had FIRST AVENUE hit the shops, when a proposed Folk Opera based around their favourite tipple, Whisky morphed into something called Bourbon and Burlesque which won plaudits at the Edinburgh Festival but has yet to see the light of day as a record.

Which brings us to this three track EP based around the saucy Lilly who lives life to the full and isn’t averse to a little sniff or two of Cocaine, as the rumbustious second track will testify. Then; as your Mother told you, hard drugs are bad for you and they eventually take their toll on Lilly; who, as the third and final track testifies; passes to the other side, butAin’t No Grave (can hold her)!

Each of the three tracks stands tall on their own merits; but when played in sequence they tell a wonderful story that highlight’s Conrad Bird’s skill as a writer and arranger.

Holy Moly are based around a core of four; Ash Etchells-Butler on drums, Rosie Bristow who can make an accordion swing, Ruth Patterson on the sweetest violin and even sweeter vocals and Conrad Bird who sings and plays acoustic guitar as if his life depended on it!

For this EP they are augmented by Henry Bird on horns, Dave Martin on Bass and Peter Hogan on electric guitar and somehow this odd septet have managed to create music that sounds like a mix of Dr. John, The Pogues, Gogol Bordello and Joni Mitchell. Don’t believe me? Give them a listen and tell me I’m wrong.