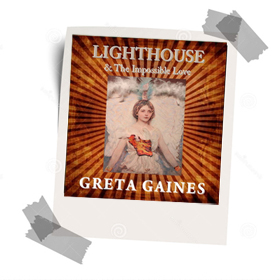 I’ve always been attracted to album covers; as it’s always an important part of the package, but recently it’s become something of an obsession; mostly because of the amount of half-hearted and amateurish designs that I come across. Even in this download age; most music fans will still scan websites looking for new music; so the album cover is just as important as ever; which brings me to the artwork for Greta Gaines’s LIGHTHOUSE & THE IMPOSSIBLE LOVE. The cover is so inept it kept this brilliant album in the review box for seven weeks. I just couldn’t bring myself to listen to the contents every time I picked the CD up as I presumed it was going to be a Sinead O’Conner sound-alike. Let this be a lesson to aspiring musicians.

Everything else ticks all of my boxes – great voice, even better songs and a band that can Rock the house to its foundations.

The opening track, Door 2 Door is one of the slowest and sweetest here and is just made for playing as the sun is setting and you are pining for love, lust or whatever. Pining Away is very similar and had me going. “Oooh,” several times as the harmonies drifted out of my speakers.

Good Side, manages to showcase the band, especially an unnamed guitarist who sure can make that thing sing. The song itself is the best bit of Southern Country Soul I’ve heard in years and Greta Gaines won my own heart after thirty seconds.

The title track Lighthouse and the Impossible Love is full of punchy drumming, gritty guitars and a voice fed through a decoder that will make your hair stand on end; but it will also excite you in ways it’s best not to speak of in public. It’s already gone into my ‘Songs of the Year’ file.

Greta Gaines voice sounds uncannily like early Lucinda Williams and, to some degree the whole ‘mood’ of LIGHTHOUSE AND THE IMPOSSIBLE LOVE is not unlike Lucinda’s latter day albums too; which is meant as a compliment.

While the singer’s background as an Extreme Snowboarding Champion, TV host, fisher-woman and keynote speaker for marijuana reform is interesting, her music doesn’t lend itself to any of those worlds. This is grown-up, cool Americana music aimed at people who actually appreciate lyrics and musicianship; and those of us who give it time will be repaid in aces.