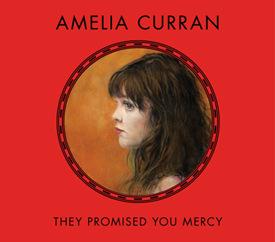 They Promised You Mercy

Canadian songstress makes another leap towards the Big Leagues

Music has; and always will be subjective so I can’t really explain why I like Amelia Curran’s songs and voice so much. Her lyrics are always sharp and thoughtful and her voice is velvety smooth which tends to match the melodies in her songs.

On one level THEY PROMISED YOU MERCY makes for majestical background music; but heard on good quality headphones those same songs are so deep they evoke memories of discovering Joni Mitchell and Carole King in my youth.

Coming For You has a cool Folk sound in the way Amelia enunciates the words; but the overall sound is pure Rootsy Country and therein lies the beauty and strength of this album; it could and should appeal to Americana music lovers of all persuasions.

I absolutely fell in love with the laid-back, punchy guitar playing on Song On The Radio the first time I heard it; but the haunting words also managed to touch a raw nerve and played loud on the car stereo this song reaches parts AC/DC can only dream of.

Michael Phillip Wojewedo’s crystal clear production brings out the best in Amelia Curran’s voice and sophisticated guitar playing; but his orchestration on songs like Somebody Somewhere and I Am The Night makes a complex sound appear very simple indeed; which is quite a feat to pull off.

The album closes with an enchanting song called You’ve Changed which sums up Amelia Curran’s career; as she has changed from album to album slowly evolving from the chrysalis that was HUNTER HUNTER in 2009 and becoming a songwriting butterfly that is about to spread her wings.