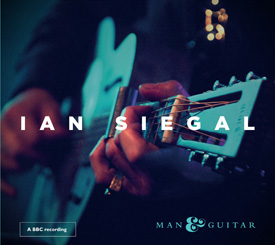 After a decade or more living the life of a journeyman Troubadour; Ian Siegal’s last two career defining albums The Skinny and Candy Store Kid; have finally catapulted him into the Premier League of British Blues players.

Reinventing himself on a regular basis; and playing with an assortment of sidekicks and bands this album was recorded by the BBC last year as part of the Bluesfest at the Royal Albert Hall, London and showcases British Bluesboy doing what he does best; playing the rawest, dirtiest Delta Blues all by himself.

The concert/album opens with the self-penned The Silver Spurs featuring Siegal’s signature growl and feisty guitar playing; and he follows that with the traditional Mary Don’t You Weep. Casual listeners will probably have switched off by now; as it’s not easy listening but those who stay are in for a glorious hour or more of Delta Blues played from the heart and with great aplomb.

The record company have left in a few intros and my favourite is when Siegal insists that the greatest ever guitar player was Charlie Patton; which goes some way to letting you know where he’s coming from; and his version of Pony Blues is as good as I’ve ever heard.

Siegal sounds like he’s having the time of his life playing on the Albert Hall stage and his interpretations of his own I Am the Train from Candy Store Kid; and Tom Russell’s Gallo Del Cielo are truly staggering for a man so very English; and by the time he gets to the encore Hard Times (Come Again No More) you can virtually hear a pin drop until the rapturous applause when it ends.

MAN & GUITAR is a real treat for aficionados of acoustic Blues and will come as a breath of fresh to many who didn’t realise that this style of music is still alive and well.