Music lands on my desk from a variety of countries; yet very little from my own doorstep in the NE of England. Who knows why; possibly because I don’t belong to any of the cliques that tends to spawn musical cultures; possibly because these bands and singers don’t think I’m any good!

Which brings us the Spitfire Bullets; whose name popped up on a friend’s Twitter timeline and the name attracted me; so I got in touch even though I knew exactly nothing about them.

Before these two discs arrived I tried to research the band; but they remain mysterious and something of an enigma; although a bizarre event on my own Twitter feed unknowingly did bring them to my attention; but I wasn’t to know that at the time! 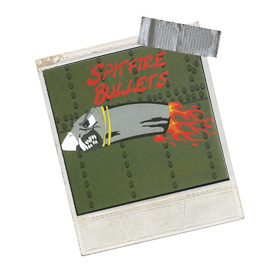 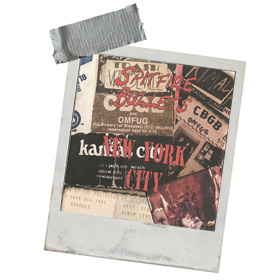 The bands second single opens with the chorus driven New York City; instantly evoking memories of the first Damned LP and too many Toy Dolls gigs. The (unnamed) singer has a raspy voice; which is perfect for breakneck songs like this. The immediate difference between bands like Spitfire Bullets and the Punk originators is that the modern bands can play their instruments and understand the concept of production.

That last sentence gets thrown right out of the toilet window with second song Psycho Girl! Recorded ‘live’ at the CBGB’s of Wearside, Farringdon WMC this track is 110mph Stella Artois fuelled spittle enhanced Punk; with added whistles and feedback.

New York City re-enters the frey with a live version recorded at the same prestigious venue and is virtually unrecognisable as it sounds like it was recorded on a Casio Cassette Recorder just before the batteries died.

These two tracks are as awfully authentic as any Punk gig I ever attended; but not something you want to play on a first date.

It was the cool band name Spitfire Bullets that first caught my attention; and this their debut single sounds exactly like what you would expect of a band with that moniker.

The title track Spitfire! crashes out of the speakers with some of the dirtiest guitar that I’ve heard in ages; then the singer attempts to swallow the microphone in his attempt to get his message across. The bass and drums hold the show together with gaffer tape and luck; but the end result is a doozy.

Psycho Girl starts with the traditional 1-2-3-4 and you can sense the veins popping out of the singers neck as he screams his love for two skull crushing minutes of scorching Metalic-Punk.

Head in the toilet starts with some deliberate feedback; and the tale of teenage angst wouldn’t have been out of place on a Dogs D’Amour or even those old romantics the Angelic Upstarts; but it’s unlikely to ever get played on BBC Radio2.

Then we finally arrive at the best of the bunch – She’s a Punk! The obligatory crashing guitars get the show on the road; but the produced judiciously uses his fader to allow a good song to be heard as the band get faded down when the singer sings and back up to 11 at other times.

‘Back in the day’ an observational song like this would actually have been played on Radio 1; certainly by John Peel; and possibly by the likes of Kid Jensen; but today? Highly unlikely; which is a damn shame.

So, there you have it The Spitfire Bullets keeping the Punk flag flying high in a time when the world needs more shouty music.