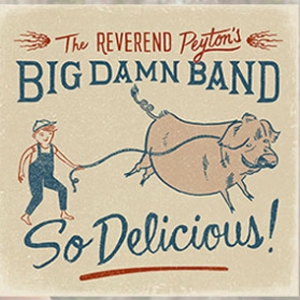 The Reverend Peyton’s Big Damn Band’s concerts are almost legendary; but like many of his contempories he’s never managed to transfer that excitement onto vinyl…….until now; and by Golly Gosh they really have and the end result is spectacular.

Pouring a heady mixture of Blues (the Rhythm variety), Jug Band Music, Ragtime,  Folk Music and more than a pinch of Rockabilly into a Mason Jar then allowing it to ferment The Rev, Breezy, Bird Dog and an assortment of other musical miscreants kick start the party with Let’s Jump a Train and I just might do if the band were playing the Buffet car.

The opening guitar chords on Raise a Little Hell; are so dirty they could be illegal in certain countries; and Peyton’s voice manages to make Tom Waits sound a little sissy during four minutes of absolute fun and games that will be the song of my Summer.

Just like their gigs, the Big Damn Band start at 99mph and then let the throttle out with Front Porch Trained and the aptly monickered We Live Dangerous which will have you growling harmonies on the chorus.

Scream at the Night sounds like I’ve known it all of my life; as it combines the very best of 70’s Folk Rock and the cream of Alt. Country from the 90’s…..and yes; it is ten times better than anything Mumford and Sons have ever recorded!

While not to everyone’s taste I absolutely love the gorgeous slide playing on the Delta Blues song You’re Not Rich; which brings out the absolute best in the Mountain Man’s husky voice.

Then the album comes to an end; but what an end; as everything you’ve heard previously is knocked into a cocked hat with the rip-snortingly glorious Revivalist song; Music and Friends which absolutely sums up The Reverend Peyton’s Big Damn Band.

One thought on “Reverend Peyton’s Big Damn Band – So Delicious”