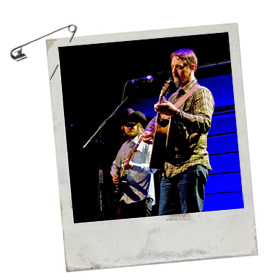 The spectacular Hall II at Sage Gateshead was less than half full when Glaswegian trio Daniel Meade & the Flying Mules took to the stage. Wearing a big Stetson and a scowl, Daniel and band were a pleasant surprise, mixing traditional country music with a bit of bluegrass and a heavy dose of the blues. A couple of their songs were quite memorable, especially “Not My Heart Again”, which they’ve apparently just recorded alongside the Old Crow Medicine Show, and “Not Your Fault; I Guess It’s Mine”, which featured some sparkling guitar work from Lloyd Reid, who sounded like a Django Reinhardt-Chet Atkins hybrid.

There was a definite buzz of anticipation from the 200 or so excited fans, when a hatless Sturgill Simpson and his band made their entrance onto the darkened stage to noisy applause.

Simpson’s voice was a bit ragged after 14 straight concerts and his slow drawl made the opening song “Sad Songs and Waltzes” difficult to recognise, but the gears were immediately cranked up for “Sitting Here without You”, which followed. As the applause died down, a smiling Simpson got about 20 seconds into song three when there were all kinds of crackles, pops, and whizzes from the speakers. He started again, but the noises re-appeared after about 30 seconds. As a new microphone was sought, Simpson chatted with the audience. He eventually got a geography lesson from Jumping Hot Club stalwart Sid Carne, when he described Gateshead as a city (it’s a town), which became a running joke as the night went on.

When the mic was finally re-set up, a visibly upset singer and band soon went into “Time After All”, which featured two gnarly guitar solos from Simpson and the Estonian Cowboy Laur Joamets. This seemed to relieve some of the tension on the stage. The next song was introduced as “the last of the road songs” — and “Long White Line” was greeted enthusiastically by the fans; only to be blighted by yet  more crackles. So, the band had to perform a do-over, following more jokes from the frustrated singer.

By the time they manfully got halfway through the Stanley Brothers’ “Medicine Springs”, the noises were virtually constant. At one stage, it looked like the roadies had been joined by a butcher, baker, and candlestick maker in their quest to rectify the problem. The singer had been a trouper so far, but, after the leads had been changed for a third time, he apologized and took the band off the stage.

Ten minutes later, they reappeared with Simpson now sporting Daniel Meade’s guitar (our guess of a faulty pick-up being proved correct). After another apology, the band ripped up the house with a boisterous version of “Living the Dream”. Simpson now had a face like thunder and, unsurprisingly, the next couple of songs were filled with fire and brimstone, with Joamets being allowed a couple of long and intricate solos — two of which drew spontaneous applause. Once Simpson had worked his way through his funk, the real concert began and the guitar picking on “Life of Sin” can only be described as “fiery” and halfway through Lefty Frizzell’s “I Never Go around Mirrors”, fans were smiling and nodding along with the beat.

The Kentuckian finally getting to prove what a great country voice he has.

As the band tried to make up for lost time, they went slightly over the curfew with a pretty damn fine version of “Water in the Well”, with Joamet’s bottleneck sounding suspiciously like a pedal-steel on a real heartbreaker of a humdinger.

Now looking exhausted and embarrassed, Simpson thanked the crowd for their patience and promised to come back next year and… play for FREE!

They hardly had time to close the stage door when they returned for their obligatory encore, “You Can Have the Crown”. He prefaced this by saying he’s now grown to hate the song because he is obliged to sing it every night. It was blistering, though, and immediately got the crowd seat-dancing. One middle-aged woman got so excited I thought she might explode. At the final note, he again promised to come back and play for free next year, which was music to the ears of the man sitting next to me — the promoter for the Jumping Hot Club “free outside stage” at SummerTyne.

What can I say? This is the tightrope performers walk every night and, God bless him, Sturgill Simpson came through with his dignity and pride intact. He may just have won over any waverers in the audience.

Footnote” I spotted at least two dozen “taste-makers” from local bands, magazines, newspapers, and radio stations, which will bode well if or when he does make a return visit.