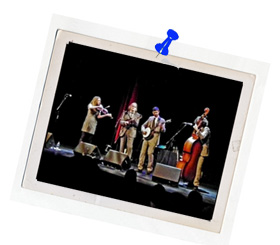 Although I’m not normally drawn towards Bluegrass music I’d been looking forward to this concert since first seeing it advertised before Christmas; as I’m a huge fan of Sid Griffin who is the founder of the Coal Porters and was a member of seminal 80’s band the Long Ryders.

The night didn’t get off to a great start with me arriving late and having to run (for want of a better description) up four flights of stairs in the bitter cold from the car park; only to find the band still doing their sound-check.

I’d significantly warmed up by the time the Coal Porters took to the stage and; as my Mother used to say – first impressions are important, because the four piece looked immaculate with the three guys in matching grey suits, white shirts and grey ties and fiddle player Carly Frey in a dress of the same colour and material.

After the first two songs; You Only Miss Her When She’s Gone and the Long Ryders favourite, Final Wild Son I was mentally transported to the Grand Old Opry and that’s where I stayed for two glorious, fun filled hours.

Griffin took lead vocals for the first hour and his voice just gets better with age. What has always been rich and colourful now has tones that only come with wear and practice and are just perfect for this type of ‘down-home’ music.

The four piece band soon got into the swing of things with Carly Frey using her fiddle to flirt with Griffin on Barefoot on the Courthouse Lawn; which was a sight I’d never seen before!

Another surprise came halfway through a rip-roaring version of Bill Monroe’s Pike County Breakdown when a grey suited guitar player ran on from stage-left and took up his place between Griffin and banjo player John Breese without anyone missing a note; the pantomime entrant was actually founder member Neil ‘Bob’ Herd, who I hadn’t actually missed!

The first set ended soon afterwards with the Coal Porters one and only single; a Bluegrass version of Bowie’s Heroes which was so significantly different from the original that it bordered on the brilliant.

After a short refreshment break the Coal Porters were all smiles on their return and Neil Herd opened proceedings with one of his songs;Brand New Home; which was a lot more rooted in Folk than anything we’d heard previously. He subsequently sang lead on a couple of songs; and while I enjoyed them they stuck out like a sore thumb in what was primarily an Americana/Bluegrass concert. His songFarmers Hands, and the story leading up to it certainly had me looking him up the following day; but I’d have enjoyed him a lot more if he’d been the support act.

I’ve often wondered; what is the difference between a violinist and a fiddle player. Tonight I think I found an answer, as Carly Frey is a classically trained violinist making her Bluegrass fiddle playing awe-inspiring. I’ve never heard anyone in the Country music world sound as good or clear as Ms. Frey did tonight and watching her clearly enjoying herself only added to the pleasure she gave us.

Although not quite ‘ Duelling Banjos;’ more a skirmish between fiddle and banjo’ it was a sheer delight to watch and hear Carly and John Breese take these instruments to Country Heaven and back on their self-penned instrumental Betsy Trotwood.

After spending a couple of songs in the shadows Sid strapped on his banjo for the toe-tapping Hush U Babe which was followed by a delightfully soft version of Like a Hurricane.

The set ended with a song that will appeal to many readers (and musicians) – Closing Time Genius which is about “drinking yourself talented!”

They had hardly left the stage when they returned for the obligatory encores; the first of which was Griffin’s New Cut Road during which he, Herd and Carly Frey alternated vocals and was probably the highlight of the whole evening.

This was followed by the five supremely talented musicians taking to the front of the stage sans microphones for a traditional Bluegrass version of Dylan’s You Ain’t Going Nowhere which allowed each to do a well deserved solo spot that ended the evening with everyone on and off stage smiling.

The Coal Porters are well worth seeing and indeed, listening too and I can’t recommend them highly enough.