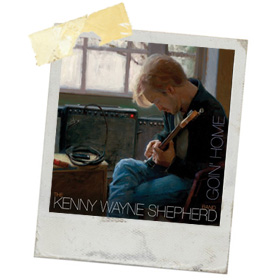 Until last year’s collaboration with Stephen Stills on the Rides project Kenny Wayne Shepherd hadn’t really crossed my radar; as I had him pigeon-holed as another long and rambling, Blues-Rock guitar noodler; but a bit of research led me to understand that there is a whole lot more to him than just that.

On Goin’ Home Shepherd has a bit of time off and holed up in a studio with an assortment of buddies like Ringo Starr, Joe Walsh, Keb’ Mo and Warren Haynes to name a few (he obviously moves in different circles to me and you) and come out the other side with a wonderful album of Classic and his  favourite Blues songs from through the ages and put his own fabulous stamp on them. To some degree you might think ‘does the World need another album with versions of You Can’t Judge a Book By The Cover, Boogie Man and Born Under a Bad Sign’ and I’d probably agree with you but these all sound new and fresh and obviously recorded with a smile on everyone’s faces.

Sometimes it’s the circumstances that you first hear a record that tempers your opinion; and in this case Goin’ Home went into the car stereo on a long road trip which coincided with the first sunny day in weeks – the dial was soon cranked up to 11 and by the time I Live The Life I Love blasted out of the speakers I was singing/screeching along like a One Direction fan; and punching the air when I recognized a song and even providing harmonies on Looking Back and the honky tonk piano fueled House is a Rockin’!!

I doubt if this album was ever destined to win Shepherd any new fans as it just sounds like the band and him are having an absolute blast and record sales will just be an added bonus.